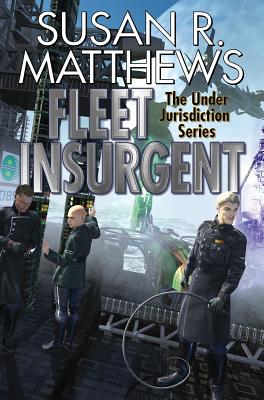 NOVELLAS, SHORT STORIES, AND MORE IN THE CRITICALLY ACCLAIMED UNDER JURISTICTION SERIES from John W. Campbell Award finalist Susan R. Matthews. Together for the first time, here are the novellas, novelettes, and short stories that complete Matthews' epic science fiction series. Plus, supplemental materials that flesh out Matthews' characters and detailed worldbuilding.

Collected for the first time, here is the complete Under Jurisdiction body of work falling outside of Matthews' celebrated novels: long out-of-print short stories fleshing out details of the personal histories of favorite characters, including Joslire Curran and Security Chief Stildyne; substantial novellas—two published here for the first time ever—covering critical events in the life of the series, such as the devil’s bargain between Andrej Koscuisko and Captain Lowden on the Ragnarok; and many more novelettes, stories, and vignettes from The Life and Hard Times of “Uncle” Andrej Koscuisko, who is Not a Nice Man.

"A very satisfying entry in a very scary series!"—Janis Ian on Blood Enemies

Susan R. Matthews was raised in a military family and spent her younger years living around the globe in a myriad of places including Germany, both coasts of the U.S., and India. Often cut off from television and other media, she read voraciously. Her first encounters with science fiction came via classics such as I, Robot and Stranger in a Strange Land. Matthews' debut novel, An Exchange of Hostages, the first entry in her critically acclaimed Under Jurisdiction series, was nominated for the Philip K. Dick Award. Matthews was also a finalist for the John W. Campbell award for best new writer. There are now seven novels in the Under Jurisdiction series. The first six are collected in two omnibus editions Fleet Inquisitor and Fleet Renegade. The newest entry in the series is Blood Enemies, published by Baen Books. Matthews lives in Seattle with her wife, Maggie, and two delightful dogs. She is a veteran of the U.S. Army, where she served as operations and security officer of a combat support hospital. She is also an avid HAM radio operator.
or support indie stores by buying on
(This book is on backorder)
Copyright © 2020 American Booksellers Association