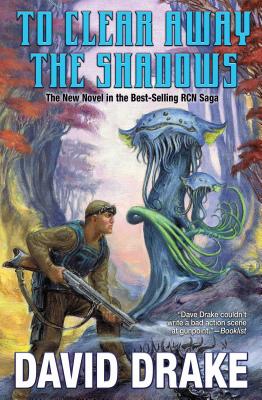 To Clear Away the Shadows (RCN #13) (Hardcover)

ADVENTURES BEYOND THE EDGE OF THE KNOWN UNIVERSE

The truce between Cinnabar and the Alliance is holding, and the Republic of Cinnabar Navy is able to explore regions of the galaxy without the explorers being swept up in a great power conflict.

Harry Harper has just been posted to the Far Traveller. He’s an RCN officer by convention, a scientist by training—and a member of one of the leading aristocratic families on Cinnabar by birth.

Lieutenant Rick Grenville would rather serve on a warship in the heart of battle, but peace and the whim of the Navy Board have put him on an exploration vessel instead. He finds that the dangers on the fringes of civilization are just as great as those from the missiles and gunfire that he expected to face.

As internal struggles cause the Alliance to relax its iron grip, regional forces are attempting to increase their own power—and they’re not fussy about the means they use.

Besides the biological answers that officials on Cinnabar expect the Far Traveller to find, the ship’s director of science, Doctor Veil, has her own agenda: to learn more about the Archaic Spacefarers, who roamed the universe tens of thousands of years before humans reached the stars.

The crew of the Far Traveller is poised to clear more of the shadows away from the deep past than ever before in human history—if they survive.

About To Clear Away the Shadows:

Praise for prequel Though Hell Should Bar the Way:

“Though Hell Should Bar the Way is vastly entertaining, a tale that demonstrates Drake’s skill as an author, illustrating why Drake is one of the best living science fiction authors today."—The Daily News of Galveston County

RCN series:
With the Lightnings
Lt. Leary, Commanding
The Far Side of the Stars
The Way to Glory
Some Golden Harbor
When the Tide Rises
In the Stormy Red Sky
What Distant Deeps
The Road of Danger
The Sea Without a Shore
Death's Bright Day
Though Hell Should Bar the Way

David Drake was attending Duke University Law School when he was drafted. He served the next two years in the Army, spending 1970 as an enlisted interrogator with the 11th Armored Cavalry in Vietnam and Cambodia. Upon return he completed his law degree at Duke and was for eight years Assistant Town Attorney for Chapel Hill, North Carolina. He has been a full-time freelance writer since 1981. His books include the genre-defining and bestselling Hammer’s Slammers series, the nationally bestselling RCN series including The Sea Without a Shore, Death's Bright Day, and Though Hell Should Bar the Way.
or support indie stores by buying on
Copyright © 2020 American Booksellers Association