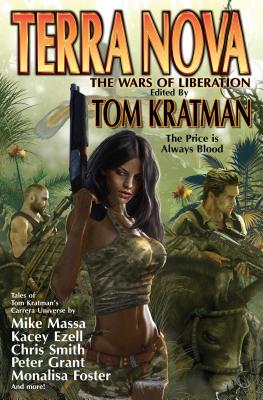 The Wars of Liberation

THE BLOODY PATH TO LIBERTY

“Send us your tired, your poor,” says the inscription at the base of the great statue, “your huddled masses yearning to be free.”

But the future of the first ever colony planet, Terra Nova, and its relations with Old Earth is far more a case of “boot out your tired, your poor, your dissidents and troublemakers. Use us for a dumping ground for all your problems. Go ahead and abandon these here.” This might have been fine, too, but for the UN and its corrupt bureaucracy insisting on maintaining control and milking the new world and its settlers, willing and unwilling both, bone dry.

Contained herein are tales of the history of mankind’s future first colony, from the first failed attempt at colonization, to the rise in crime, to the rise in terrorism, to its descent into widespread civil war and rebellion . . . and ultimately liberation. As with most of human history, this history is messy, with good men and women turning bad, bad men and women inadvertently doing good, and blood flowing in the streets.

“[I]nterplanetary warfare with. . .[a] visceral story of bravery and sacrifice . . . fans of the military SF of John Ringo and David Weber should enjoy this SF action adventure.”–Library Journal

In 1974, at age seventeen, Tom Kratman became a political refugee and defector from the PRM (People’s Republic of Massachusetts) by virtue of joining the Regular Army. He stayed a Regular Army infantryman most of his adult life, returning to Massachusetts as an unofficial dissident while attending Boston College after his first hitch. Back in the Army, he managed to do just about everything there was to do at one time or another. After the Gulf War, with the bottom dropping completely out of the anti-communist market, Tom decided to become a lawyer. Every now and again, when the frustrations of legal life and having to deal with other lawyers got to be too much, Tom would rejoin the Army (or a somewhat similar group, say) for fun and frolic in other climes. His family, muttering darkly, put up with this for years. He no longer practices law, instead writing full-time for Baen. His novels for Baen include A State of Disobedience, Caliphate, and the series consisting of A Desert Called Peace, Carnifex, The Lotus Eaters, The Amazon Legion, Come and Take Them, The Rods and the Axe, and A Pillar of Fire by Night. He has written novels with John Ringo: Watch on the Rhine, Yellow Eyes, and The Tuloriad. Also for Baen, he has written the first three volumes of the modern-day military fiction series Countdown.
Loading...
or
Not Currently Available for Direct Purchase