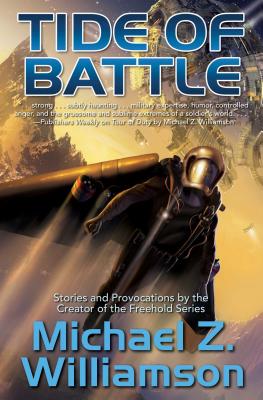 WE ONLY LIVE HERE.

Enter the mind of multiple best-selling author Michael Z. Williamson with this new collection of stories, essays, and provocations, sure to entertain, thrill—and scandalize.

And when Williamson turns his eye to pop culture, no sacred cows are safe as he skewers modern movies, classic poetry, beloved firearms, and the way we live today. Rounding out the volume is a fresh batch of his Inappropriate Cocktail recipes—frequently both delicious and outrageously snarky, commemorating celebrities, events, and cultural memes.

Michael Z. Williamson is retired military, having served twenty-five years in the U.S. Army and the U.S. Air Force. He was deployed for Operation Iraqi Freedom and Operation Desert Fox. Williamson is a state-ranked competitive shooter in combat rifle and combat pistol. He has consulted on military matters, weapons, and disaster preparedness for Discovery Channel and Outdoor Channel productions, and is editor-at-large for SurvivalBlog, which has 300,000 weekly readers. In addition, Williamson tests and reviews firearms and gear for manufacturers. Williamson’s books set in his Freehold Universe include Freehold, The Weapon, The Rogue, Better to Beg Forgiveness . . ., Do Unto Others . . ., and When Diplomacy Fails . . .. He is also the author of time-travel novel A Long Time Until Now, as well as The Hero—the latter written in collaboration with New York Times best-selling author John Ringo. Williamson was born in England, raised in Liverpool and Toronto, Canada, and now resides in Indiana with his wife and children.
Loading...
or
Not Currently Available for Direct Purchase