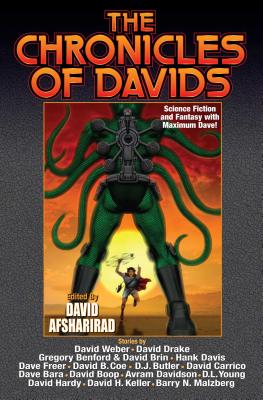 The Chronicles of Davids

The history of science fiction and fantasy is filled with stories by what we like to call “Davids of Distinction.” Now, for the first time, an anthology by people named David, for everyone. Even if your name is anything but David!

Read along as editor David Afsharirad guides you through the strange, wonderous imaginations of the great Davids of the field, past, present, and future. Fifteen tales by David Weber, David Drake, Gregory Benford & David Brin, David B. Coe, D.J. Butler, Avram Davidson, David H. Keller, and many more. Many more Davids, that is.

A Depression-era magic man comes face-to-face with an ancient evil. A once-promising filmmaker’s fate depends on a movie-producing A.I. A shape-shifting detective trails a pack of werewolves. A sentient tank must confront one of its own. And a diner regular gets more than he bargained for when he orders the very odd soup du jour. These and more. Featuring David-inspired cover art by celebrated artist David Mattingly.

REMEMBER: WITH A NAME LIKE “DAVID,” IT HAS TO BE GOOD!

About The Chronicles of Davids:

“Afsharirad brings together some of the genre's most beloved authors with David as their first name in a collection that covers time travel…space opera…AI trouble.. and military sf…a fun collection of imaginative Davids.”—Booklist

“Baen’s fan-guided anthology series roars into its second year with a collection of stories just as eclectic as the first. . . . Afsharirad has put together a refreshing military and SF anthology that will be enjoyed by a wide range of readers.”—Publishers Weekly (starred review)

“This intriguing anthology explores the human race’s violent potential [but] also bends toward exploration and the triumph of the human spirit, with brave tales [that] take the reader on a fascinating, thought-provoking, enjoyable journey . . . ”—Publishers Weekly (starred review)

“[A] nice eclectic mix of magazines—hardcopy and digital—and original anthologies. Afsharirad seems to have cast his nets admirably wide. . . . The variety of styles and topics and themes, and the high level of craft in this assemblage, prove that this subgenre is flourishing. . . . [The collection] should be welcome by raw recruits and veterans alike.”—Locus

David Afsharirad is the editor of the Year's Best Military and Adventure SF series. his short stories have appeared in various magazines and anthologies. He lives in Austin, TX with his wife and sons.
Loading...
or
Not Currently Available for Direct Purchase