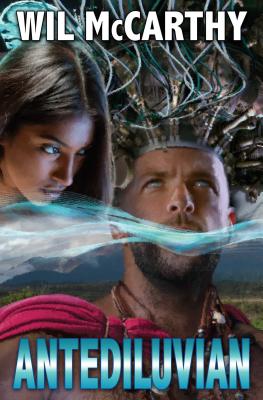 What if all our legends are true? A rousing, fast-paced novel of time travel unlike any other, from acclaimed author Wil McCarthy.

Before disaster erased the coastlines and river valleys of the Antediluvian age—before the mythic Flood—men and women struggled and innovated in a world of savage contrasts. It turns out that our legends of the Stone Age are even older than we think. It was a time when a world of archetypes and myths was written upon the fabric of humanity itself in the deepest way—a world that has only been preserved in the oldest stories with no way to actually visit it.

In a brilliant and dangerous brain-hacking experiment, Harv Leonel and Tara Mukherjee are about to discover entire lifetimes of human memory coded in our genes, and reveal ancient legends—from knights and trolls to the birth of humanity itself—that are very real. And very deadly.

About Antediluvian:
“. . . gripping and. . . grounded in archaeology.”—Publishers Weekly

“. . . plenty of verisimilitude. . .superbly intriguing and captivating. . . bravura historical recreations, full of conjectural material. . . . Presenting us with a colorful cast of characters from across the millennia who have thick and rich existences, and affirming that the cosmic stream of life flows forcefully despite all small blockades, McCarthy has written a novel that looks both forwards and backwards, thus making a stellar return to the field.”—Locus

Wil McCarthy:
"McCarthy is an entertaining, intelligent, amusing writer, with Heinlein's knack for breakneck plotting and, at the same time, Clarke's thoughtfulness."—Booklist

“In nearly every passage, we get another slice of the science of McCarthy’s construction, and a deeper sense of danger and foreboding... McCarthy develops considerable tension.”—San Diego Union-Tribune

Previously a flight controller for Lockheed Martin Space Launch Systems and later an engineering manager for Omnitech Robotics and founder/president/CTO of Raven Brick LLC, McCarthy hold patents of his own in seven countries, including twenty-nine issued U.S. patents in the field of nanostructured optical materials.
Loading...
or
Not Currently Available for Direct Purchase