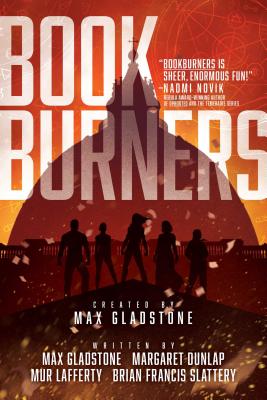 The critically acclaimed urban fantasy about a secret team of agents that hunts down dangerous books containing deadly magic—previously released serially online by Serial Box, now available in print for the first time!

Magic is real, and hungry. It’s trapped in ancient texts and artifacts, and only a few who discover it survive to fight back. Detective Sal Brooks is a survivor. She joins a Vatican-backed black-ops anti-magic squad—Team Three of the Societas Librorum Occultorum—and together they stand between humanity and the magical apocalypse. Some call them the Bookburners. They don’t like the label.

Supernatural meets The Da Vinci Code in a fast-paced, kickass character driven novel (previously published serially at SerialBox.com/Serials/Bookburners) chock-full of magic, mystery, and mayhem, written collaboratively by a team of some of the best writers working in fantasy.

“Recommended for those looking for a breezy, entertaining and exciting fantasy read.”
— Booklist

"As much fun as binge-watching a full season of a Showtime series."
— Publishers Weekly

"[The] breakneck pace never feels rushed, and its balance between the horrifyingly demonic and the hilariously clever never falters."
— B&N SciFi & Fantasy Blog

Max Gladstone is the author of the Hugo-nominated Craft Sequence, which Patrick Rothfuss called “stupefyingly good.” The sixth book, Ruin of Angels, was released September 2017. Max’s interactive mobile game Choice of the Deathless was nominated for the XYZZY Award, and his critically acclaimed short fiction has appeared on Tor and in Uncanny Magazine, and in anthologies such as XO Orpheus: Fifty New Myths and The Starlit Wood: New Fairy Tales. John Crowley described Max as “a true star of 21st-century fantasy.” Max has sung in Carnegie Hall and was once thrown from a horse in Mongolia.
Loading...
or
Not Currently Available for Direct Purchase