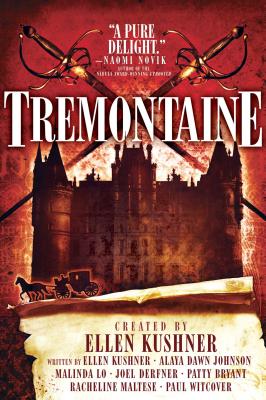 A duchess’s beauty matched only by her cunning; her husband’s dangerous affair with a handsome scholar; a foreigner in a playground of swordplay and secrets; and a mathematical genius on the brink of revolution. Suddenly long-buried lies threaten to come to light and betrayal and treachery run rampant in this story of sparkling wit and political intrigue.

Written serially by six critically acclaimed authors, Tremontaine is a tale of intrigue, manners, treachery, and cleverness that will delight readers.

“A pure delight full of sparkling characters that match equally dazzling wits and swords. If you've visited the world of Swordspoint before, you'll be delighted to return; if it's your first time, you'll be welcomed in style. I can't wait to read more myself!”
— Naomi Novik, author of the Nebula Award-winning Uprooted and the New York Times bestselling Temeraire series

“Lovely! Beneath a froth of silk and lace Tremontaine is finely muscled, rippling with skill and promise.”
— Nicola Griffith, author of Hild

"A binge-ready fantasy of manners, packed with swordplay, witty banter and chocolate."
— NPR

"Well-paced, excellently written, delighting in the opportunity to fully indulge in its drama of manners (and swords), it's one of the most accomplished and purely enjoyable things I've read in a while. I recommend it highly."
— Locus Magazine

Patty Bryant is a cafe-based writer who publishes in the romance genre under several different pen names. She has an MA in archaeology from New York University and, when she is not in the field, lives in Brooklyn, NY. She is passionate about tea, nail polish, and horror movies.
Loading...
or
Not Currently Available for Direct Purchase