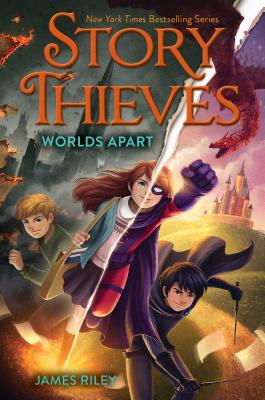 Owen and Bethany try to find their way back to each other after the fictional and nonfictional worlds are torn apart in this fifth and final book in the New York Times bestselling series, Story Thieves—which was called a “fast-paced, action-packed tale” by School Library Journal—from the author of the Half Upon a Time trilogy.

But weirdly, no one seems to mind. Owen—and every other nonfictional person—have lost their imaginations, so they can’t picture their lives any differently. Then Owen gets trapped in a dark, dystopian reality five years in the future, where nothing is needed more desperately than the power to imagine.

Fictional Bethany is thrilled to be training with her father as his new sidekick, Twilight Girl—until she realizes that the fictional reality will fade away completely without the nonfictional world to hold it together.

In this final installment of the genre-bending Story Thieves series, Owen and Bethany will be forced to risk everything to defeat Nobody and save multiple realities.

James Riley lives in Virginia. He is the New York Times bestselling author of the Half Upon a Time, Story Thieves, and Revenge of Magic series.
or support indie stores by buying on