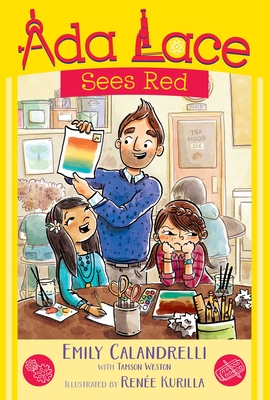 From Emily Calandrelli—host of Xploration Outer Space, correspondent on Bill Nye Saves the World, and graduate of MIT—comes the second novel in a brand-new chapter book series about an eight-year-old girl with a knack for science, math, and solving mysteries with technology.

Ada Lace is building a new robot! She’s determined to beat Milton in the upcoming robotics competition. But she’s distracted—Ada finds her dad’s art class impossible, while Nina is the star of the class, basking in the glory of being Mr. Lace’s star pupil.

When Mr. Lace suggests that Nina put on an art show, Ada becomes jealous and loses her temper. Now Ada isn’t speaking to her dad, she’s falling behind in art class, and she still doesn’t know how to fix her robot. As the competition looms closer, Ada starts to wonder if there might be a way to use both science and art to solve her problems.

Will Ada make up with her father in time to test her hypothesis? Or will her hurt feelings leave her seeing red and without a medal at the end of the day?

"The pages are full of fun b&w illustrations with a “Behind the Science” section at the end of each book."
— School Library Connection

Emily Calandrelli is an MIT engineer turned Emmy-nominated science TV host. She’s the host and coexecutive producer of Emily’s Wonder Lab on Netflix, featured as a correspondent on Netflix’s Bill Nye Saves the World, and an executive producer and host of Fox’s Xploration Outer Space. Emily is the author of the picture book Reach for the Stars, the science experiment book Stay Curious and Keep Exploring, and the science chapter book series the Ada Lace Adventures. The third book in the series was launched to the International Space Station through the Story Time from Space program. Learn more at TheSpaceGal.com.

Tamson Weston is the author of Hey, Pancakes!, illustrated by Stephen Gammell, and has over fifteen years experience in children’s book publishing. She works as a freelance editor and has edited books by acclaimed authors such as Adam Rex, Mac Barnett, and Dan Santat, among others. She has an MFA in writing and literature and enjoys running, biking, swimming, and lifting heavy things. She lives in Brooklyn, New York. Visit her at TamsonWeston.com.

Renée Kurilla is an illustrator of many books for kids, including Orangutanka: A Story in Poems by Margarita Engle, The Owls of Blossom Wood series by Catherine Coe, and the Ada Lace Adventure series by Emily Calandrelli. She has written a few books as well, including the picture book One Springy, Singy Day and the graphic novel The Flower Garden. She currently lives in Bellingham, Massachusetts, with her illustrator husband Keith Zoo, their six-year-old daughter Zoey, and Yoshi the fish. Visit her at Kurillastration.com.
Loading...
or support indie stores by buying on