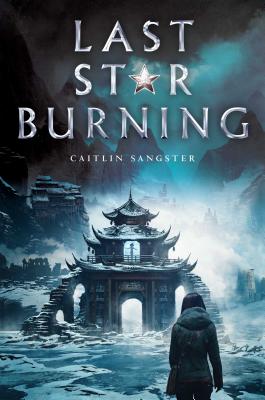 To escape execution for a crime she didn’t commit, sixteen-year-old Sev is forced to run away from the only home she’s ever known in this “richly imagined” (BCCB, starred review) post-apocalyptic debut novel from Caitlin Sangster.

Sev is branded with the mark of a criminal—a star burned into her hand. That’s the penalty for being the daughter of the woman who betrayed their entire nation.

Now her mother’s body is displayed above Traitor’s Arch, kept in a paralyzed half sleep by the same plague that destroyed the rest of the world. And as further punishment, Sev is forced to do hard labor to prove that she’s more valuable alive than dead.

When the government blames Sev for a horrific bombing, she must escape the city or face the chopping block. Unimaginable dangers lurk outside the city walls, and Sev’s only hope of survival lies with the most unlikely person—Howl, the chairman’s son. Though he promises to lead her to safety, Howl has secrets, and Sev can’t help but wonder if he knows more about her past—and her mother’s crimes—than he lets on.

But in a hostile world, trust is a luxury. Even when Sev’s life and the lives of everyone she loves may hang in the balance.

Caitlin Sangster grew up in Northern California, moved to XinJiang when she was eighteen, and has been fascinated with how much she doesn’t know about the world ever since. She graduated from Brigham Young University with a degree in Asian studies and is the person you avoid at parties because she will probably start talking about Shang dynasty oracle bones. Caitlin lives with her husband and four children in Utah. For more about Caitlin visit her at CaitlinSangster.com, on Twitter @CaitSangster, or Facebook.com/CaitlinSangsterAuthor.

Brimming with rich detail in an Asian-inflected alternative world that's lightly touched with Maoist terminology and concepts and helmed by achingly real characters, Sevvy's story is thrilling to get lost in. By the end, readers will be clamoring for more. Incredibly immersive and tightly plotted.
— Kirkus Reviews
or support indie stores by buying on
Copyright © 2020 American Booksellers Association