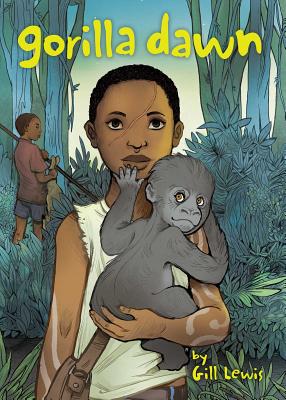 Two children captured by a band of rebel soldiers in the Congo vow to protect an orphaned gorilla baby in this powerful, thought-provoking, and vividly compelling novel from award-winning storyteller Gill Lewis.

Deep in the heart of the Congo, a baby gorilla is captured by a group of rebel soldiers. Imara and Bobo are also prisoners in the rebels’ camp. When they learn that the gorilla will be sold into captivity, they swear to return it to the wild before it’s too late. But the consequences of getting caught are too terrible to think about. Will the bond between the gorilla and the children give them the courage they need to escape?

A child soldier and a park ranger's son rescue an infant gorilla. Binding together the world's need for columbite-tantalite for its electronic devices, the fate of lowland gorillas in the Democratic Republic of Congo's forests, the importance of park rangers, and the life of a young female kadogo, or child soldier, Lewis reminds her readers how strongly connected humans are to the natural world. "If we lose our love of it, then we lose everything." Imara, the "spirit child" of the Black Mamba's guerilla group, is already lost. Severely scarred on her face by her captor, she believes she harbors a demon. The rebels believe she has supernatural powers and can protect them. But given the care of the baby gorilla captured for the White Lioness—the foreigner who will also buy the coltan they are mining and the book's only significant white character—she begins a recovery process. It culminates with her helping two other captives, a dead park ranger's son, Bobo, and a Batwa boy, Saka, save the gorilla baby and being saved herself. Typography distinguishes human voices from imagined gorilla thoughts; chapter headings show changing points of view between Imara and Bobo; and the author emphasizes Imara's recovery by giving her a first-person narrative at the end. Suspenseful and emotionally intense, this is eco-fiction at its most appealing. A riveting survival adventure with an important message. (Fiction. 9-14)
— Kirkus, STARRED REVIEW

As a child enslaved to a pitiless and greedy rebel leader who rules his desperate band in the jungles of the Democratic Republic of the Congo, Imara has accepted a dark voice inside of her so she can survive in the role of the group’s Spirit Child. When the leader establishes an illegal mining operation inside a national forest, a baby gorilla kidnapped by Imara’s fellow child soldiers works its way into the girl’s closed-off heart, exposing her to all the dangers that being vulnerable can bring. Lewis drops readers into this visceral rain forest setting. She vividly follows the axiom of “show, don’t tell,” using short sentences and situational vocabulary while assuming readers will approach the book with basic knowledge about traditional Congolese religious beliefs and cultural practices. Lewis uses notes before and after the story to raise sympathy for the plight of the environment and for gorillas, while leaving truly horrifying atrocities off the page or between the lines. This novel provides middle grade readers just the right distance from the emotional resonance of the characters’ horror-filled experiences, resulting in a work that is gripping and educational though not wholly terrifying, but many may come away with a garbled and incomplete understanding of this region of the world. VERDICT A powerful read on the topic of Congolese rebel groups for intrepid middle schoolers.
— School Library Journal

As she did in Moon Bear (2015), Lewis shines a light on an industry still relatively unknown among western readers. Here, it’s the mining of coltan, a mineral key to the production of cell phones, which is often excavated in places gorillas call home. Imara, kidnapped by rebels years ago, is now a child soldier with a group starting an illegal coltan mine in the Congo. Bobo’s pursuing the rebels in hopes of clearing the name of his father, a ranger accused of leading the rebels to a band of gorillas, the youngest of which they’ve captured and intend to sell to the corrupt white business woman who’s buying the “conflict-free” coltan. Imara, meanwhile, forms a powerful bond with the 18-month-old gorilla, which she names Kitwana, reawakening her long-forgotten compassion and weakening the tough exterior that been so essential to her survival. Alternating among Imara, Bobo, and Kitwana’s perspectives, Lewis lays out the complicated relationship between widespread poverty, opportunistic groups (including white business owners and corrupt government officials), and environmental threats. The heart of the story lies firmly among the children and their struggle both to survive and not fall for the comfort promised by corrupt adults. Suspenseful pacing keeps the pages turning, and the provocative questions raised about conservation, consumerism, and the global effects of widespread poverty will keep readers thinking long after the last page. — Sarah Hunter
— Booklist, STARRED REVIEW

In the forested wilderness of the Democratic Republic of Congo, Imara is a child soldier, or kadogo, held captive by a gang of murderous rebels. In her role as Spirit Child, she "turns enemy bullets into rain," or so the rebels believe, keeping them safe as they raid villages and evade government troops. When Black Mamba, leader of the gang, sets up a mine for coltan, a mineral essential for "every computer and cell phone in the world," his buyer wants a baby gorilla as part of the deal. The gang locates a nearby gorilla family, kills the great silverback, and steals his baby for the sale.

Meanwhile, 14-year-old Bobo is searching for his father, a wildlife park ranger who disappeared while trying to protect these same gorillas. When Bobo stumbles into the Mamba camp, he, too, is enslaved by the rebels. Bobo continues to seek clues about his father even as he teaches Imara how to care for the gorilla baby. Despite intense danger, both he and Imara know they must return the gorilla to the wild.

In Gorilla Dawn, author (and veterinarian) Gill Lewis (One White Dolphin) provides a microcosm of human interconnectedness with the planet, and an author's note explains how the forests drive global weather patterns and regulate air and water quality. On top of the eco-perspective, Lewis infuses her novel with excitement and suspense, as the kadogo grapple with death on a daily basis. Amidst the brutality, it is the tenderness growing in Imara as she opens her heart to the baby gorilla that distinguishes this powerful, multifaceted story. --Lynn Becker, blogger and host of Book Talk, a monthly online discussion of children's books for SCBWI

Discover: In this suspenseful middle-grade novel, a girl enslaved by a Congolese gang learns to be as brutal as her captors--until a baby gorilla is brought into camp.
— Shelf Awareness

Gill Lewis is the author of the critically acclaimed Wild Wings and One White Dolphin, both winners of the Green Earth Book Award, as well as Moon Bear, Gorilla Dawn, and Scarlet Ibis. A veterinarian, her love of animals and the natural world plays a big part in her writing. She lives in the UK.
Loading...
or
Not Currently Available for Direct Purchase