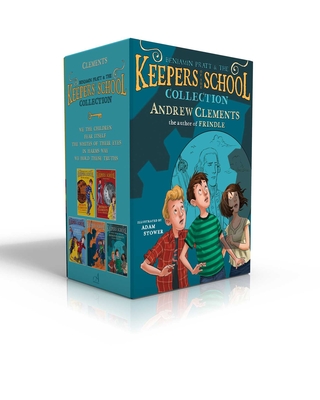 Benjamin Pratt & the Keepers of the School Collection

We the Children; Fear Itself; The Whites of Their Eyes; In Harm's Way; We Hold These Truths (Benjamin Pratt and the Keepers of the School)

A 6000-pound wrecking ball is about to demolish Benjamin Pratt’s school…And he only has twenty-eight days to figure out how to stop it.

In this fast-paced and action-packed mystery series, Benjamin Pratt and his friends Jill and Robert must figure out who is trying to destroy his school and why. At first having the school demolished to make room for an amusement park sounds pretty awesome. But when Ben stumbles upon the truth behind this grand scheme, and the ancient history buried deep within the school that goes all the way back to the Founding Fathers, he decides he’s got no choice but to stop the bulldozer before it starts and protect his school.

Adam Stower has a rich imagination and loves fantasy and adventure stories. He studied illustration at the Norwich School of Art and Design and at the University of Brighton, and lives with his daughter in Brighton, England.
Loading...
or support indie stores by buying on
(This book is on backorder)