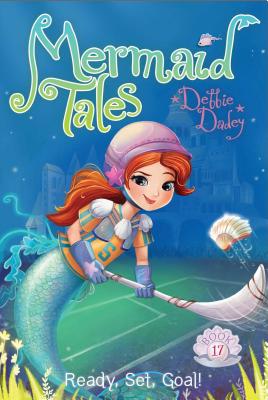 Shelly Siren and Trident Academy’s Shell Wars team travel to the city of Atlantis for the championship game in this sparkling Mermaid Tales adventure.

Shelly Siren loves playing on Trident Academy’s Shell Wars team. But is she ready to compete in the Shell Wars Championships in the fintastically famous city of Atlantis? She’s not sure, but luckily Echo, Kiki, and Pearl will be swimming along for the ride.

As part of their trip, the mergirls get a tour of Atlantis, and learn all about how the great human city ended up at the bottom of the ocean. But when they swim through Poseidon’s Temple, Shelly spots a spookfish—which legend has it, carries a horrible curse.

Shelly’s sure the curse is just a silly sea story. But after she knocks over a precious relic, accidentally hits Rocky with her Shell Wars stick, and gives another player a black eye, Shelly isn’t sure what to think. Could the Spookfish Curse be real? And will it ruin the chances of Trident Academy’s Shell Wars team taking home the championship trophy?

Debbie Dadey is an award-winning children’s book author who has written more than 150 books. She is best known for her series The Adventures of the Bailey School Kids, written with Marcia Thornton Jones. Debbie lives with her husband, three children, and three dogs in Sevierville, Tennessee.
or support indie stores by buying on
Copyright © 2020 American Booksellers Association