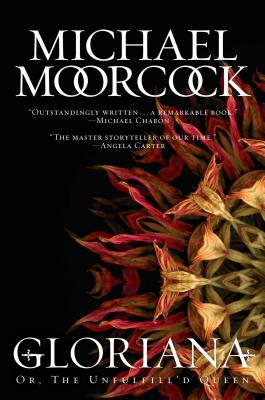 In this “spellbinding” (The Sunday Times) award-winning fantasy, the vast empire of Albion is ruled by the beautiful and forlorn queen, Gloriana who must battle against a nefarious scoundrel, Captain Quire, and a court soured by debauchery with her wits.

First published in 1978, Gloriana is the award-winning story set in the alternate English kingdom of Albion that reimagines Queen Elizabeth’s reign.

Bawdy, cruel, and brilliant, Gloriana has been awarded the World Fantasy Award and the John W. Campbell Memorial Award for Best Science Fiction, and is often cited as one of the great works of speculative fiction and fantasy along the lines of J.G. Ballard, Thomas Pynchon, and Philip K. Dick.

Michael Moorcock is one of the most important and influential figures in speculative fiction and fantasy literature. Listed recently by The Times (London) as among the fifty greatest British writers since 1945, he is the author of 100 books and more than 150 shorter stories in practically every genre. He has been the recipient of several lifetime achievement awards, including the Prix Utopiales, the SFWA Grand Master, the Stoker, and the World Fantasy, and has been inducted into the Science Fiction Hall of Fame. He has been awarded the Nebula Award, the World Fantasy Award, the John W. Campbell Award, the British Fantasy Award, the Guardian Fiction Prize, and has been shortlisted for the Whitbread Award. He has been compared to Balzac, Dickens, Dumas, Ian Fleming, Joyce, and Robert E. Howard, to name a few.
Loading...
or
Not Currently Available for Direct Purchase