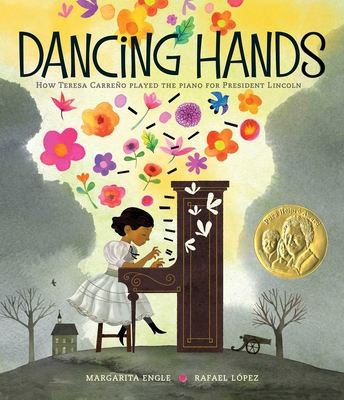 How Teresa Carreño Played the Piano for President Lincoln

In soaring words and stunning illustrations, Margarita Engle and Rafael López tell the story of Teresa Carreño, a child prodigy who played piano for Abraham Lincoln.

As a little girl, Teresa Carreño loved to let her hands dance across the beautiful keys of the piano. If she felt sad, music cheered her up, and when she was happy, the piano helped her share that joy. Soon she was writing her own songs and performing in grand cathedrals. Then a revolution in Venezuela forced her family to flee to the United States. Teresa felt lonely in this unfamiliar place, where few of the people she met spoke Spanish. Worst of all, there was fighting in her new home, too—the Civil War.

Still, Teresa kept playing, and soon she grew famous as the talented Piano Girl who could play anything from a folk song to a sonata. So famous, in fact, that President Abraham Lincoln wanted her to play at the White House! Yet with the country torn apart by war, could Teresa’s music bring comfort to those who needed it most?

Praise For Dancing Hands: How Teresa Carreño Played the Piano for President Lincoln…

* “Engle's free verse whirls and twirls, playful and vivacious, while López's vivid, colorful artwork elevates this story to heavenly heights. Like a concerto for the heart.”
— Kirkus Reviews, starred review

“Lyrical, imagery-rich text . . . Patterned mixed-media illustrations use color to evoke the lushness of Venezuela, the darkness of war, and the beauty of music. Concluding with a historical note, the biography’s vibrant images and language form a melodious composition.”
— Booklist

"Author and illustrator are well paired in this interesting narrative. Darks and lights, whether representing world events or the colors of the piano keys, are recurring themes that Engle cleverly entwines in her at times poetic writing. López’s illustrations practically leap from the page as they mirror the tone of events—bright and beautiful when the story is light; dark, drab, and gray when echoing conflict."
— School Library Journal

Margarita Engle is the Cuban American author of many books including the verse novels Rima’s Rebellion; Your Heart, My Sky; With a Star in My Hand; The Surrender Tree, a Newbery Honor winner; and The Lightning Dreamer. Her verse memoirs include Soaring Earth and Enchanted Air, which received the Pura Belpré Award, a Walter Dean Myers Award Honor, and was a finalist for the YALSA Award for Excellence in Nonfiction, among others. Her picture books include Drum Dream Girl, Dancing Hands, and The Flying Girl. Visit her at MargaritaEngle.com.

Rafael López was born and raised in Mexico, a place that has always influenced the vivid colors and shapes in his artwork. He now creates community-based mural projects around the world and illustrates acclaimed children’s books including The Day You Begin, Bravo!, Drum Dream Girl,  We’ve Got the Whole World in Our Hands, Book Fiesta!, and Dancing Hands. Rafael divides his time between Mexico and California. Visit him at RafaelLopez.com.
Loading...
or support indie stores by buying on