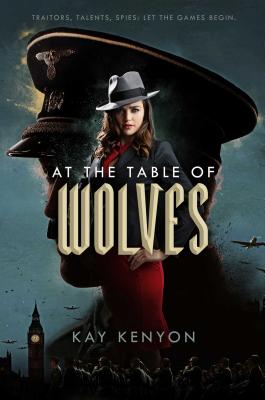 At the Table of Wolves (A Dark Talents Novel)

Tinker Tailor Soldier Spy meets Agent Carter meets X-Men in this classic British espionage story where a young woman must go undercover and use her superpowers to discover a secret Nazi plot and stop an invasion of England.

In 1936, there are paranormal abilities that have slowly seeped into the world, brought to the surface by the suffering of the Great War. The research to weaponize these abilities in England has lagged behind Germany, but now it’s underway at an ultra-secret site called Monkton Hall.

Kim Tavistock, a woman with the talent of the spill—drawing out truths that people most wish to hide—is among the test subjects at the facility. When she wins the confidence of caseworker Owen Cherwell, she is recruited to a mission to expose the head of Monkton Hall—who is believed to be a German spy.

As she infiltrates the upper-crust circles of some of England’s fascist sympathizers, she encounters dangerous opponents, including the charismatic Nazi officer Erich von Ritter, and discovers a plan to invade England. No one believes an invasion of the island nation is possible, not Whitehall, not even England’s Secret Intelligence Service. Unfortunately, they are wrong, and only one woman, without connections or training, wielding her talent of the spill and her gift for espionage, can stop it.

Praise For At the Table of Wolves (A Dark Talents Novel)…

"At the Table of Wolves is a fabulous read.  It's got the feel of Foyle's War and the tense mystery plot of a spy thriller. I enjoyed every bit of it."
— Martha Wells, author of The Books of the Raksura and The Murderbot Diaries

"I kept thinking about the book long after I read the last page, and I can’t wait to see where Kenyon’s own Talents take us next.”
— Sharon Shinn, author of Troubled Waters

Kay Kenyon is the author of fourteen science fiction and fantasy novels as well as numerous short stories. Her work has been shortlisted for the Philip K. Dick and the John W. Campbell Memorial Awards, the Endeavour Award, and twice for the American Library Association Reading List Awards. Her series The Entire and the Rose was hailed by The Washington Post as “a splendid fantasy quest as compelling as anything by Stephen R. Donaldson, Philip Jose Farmer, or yes, J.R.R. Tolkien.” Her novels include Bright of the Sky, A World Too Near, City Without End, Prince of Storms, Maximum Ice (a 2002 Philip K. Dick Award nominee), and The Braided World. Bright of the Sky was among Publishers Weekly’s top 150 books of 2007. She is a founding member of the Write on the River conference in Wenatchee, Washington, where she lives with her husband.
or support indie stores by buying on