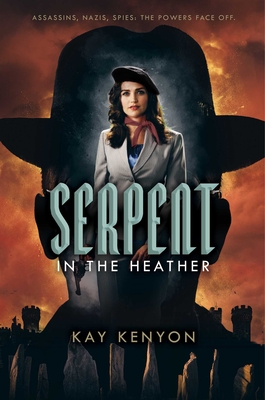 Serpent in the Heather (A Dark Talents Novel)

Kim Tavistock, now officially working for the Secret Intelligence Service, returns to solve another mystery—this time, the case of a serial killer with deep Nazi ties, in this sequel to At the Table of Wolves.

Summer, 1936. In England, an assassin is loose. Someone is killing young people who possess Talents. As terror overtakes Britain, Kim Tavistock, now officially employed by England’s Secret Intelligence Service, is sent on her first mission: to the remote Sulcliffe Castle in Wales, to use her cover as a journalist to infiltrate a spiritualist cult that may have ties to the murders. Meanwhile, Kim’s father, trained spy Julian Tavistock runs his own parallel investigation—and discovers the terrifying Nazi plot behind the serial killings.

Cut off from civilization, Sulcliffe Castle is perched on a forbidding headland above a circle of standing stones only visible at low tide. There, Kim shadows a ruthless baroness and her enigmatic son, playing her skills of deception and hearing the truths people most wish to hide. But as her cover disguise unravels, Kim learns that the serial killer is closing in on a person she has grown to love. Now, Kim must race against the clock not just to prevent the final ritual killing—but to turn the tide of the looming war.

Praise For Serpent in the Heather (A Dark Talents Novel)…

"Kenyon does a fine job of cranking the tension and making the mounting stakes plain."
— NPR Books, on AT THE TABLE OF WOLVES

Kay Kenyon is the author of fourteen science fiction and fantasy novels as well as numerous short stories. Her work has been shortlisted for the Philip K. Dick and the John W. Campbell Memorial Awards, the Endeavour Award, and twice for the American Library Association Reading List Awards. Her series The Entire and the Rose was hailed by The Washington Post as “a splendid fantasy quest as compelling as anything by Stephen R. Donaldson, Philip Jose Farmer, or yes, J.R.R. Tolkien.” Her novels include Bright of the Sky, A World Too Near, City Without End, Prince of Storms, Maximum Ice (a 2002 Philip K. Dick Award nominee), and The Braided World. Bright of the Sky was among Publishers Weekly’s top 150 books of 2007. She is a founding member of the Write on the River conference in Wenatchee, Washington, where she lives with her husband.
Loading...
or support indie stores by buying on