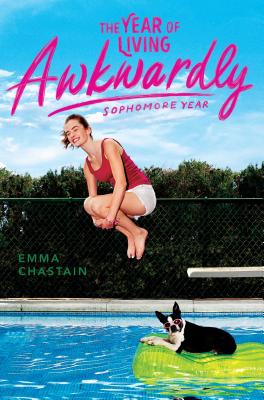 The Year of Living Awkwardly

Bridget Jones’s Diary meets Mean Girls as lovably flawed high school student Chloe Snow chronicles another year in her life while she navigates the highs and lows of family, friendship, school, and love in a diary that sparkles with humor and warmth.

Last year, Chloe was the star of the musical. This year, after an audition so disastrous she runs off the stage in tears, she’s cast as a lowly member of the ensemble. Will she be able to make it through the show knowing everyone’s either pitying her or reveling in her downfall?

Chloe’s best friend, Hannah, is no help: she’s been sucked into the orbit of Lex, the velvet-gloved, iron-fisted ruler of the sophomore class. Chloe’s dad is busy falling in love with Miss Murphy, and Chloe is no longer speaking to her mother, who is sending her increasingly desperate and unhinged emails from Mexico. As her parents’ divorce negotiations unravel, a custody battle looms.

If only Chloe could talk to Grady about it: his parents are divorced, and he’s easy to talk to. Or he was, until he declared his love for Chloe, and she turned him down because despite all her rational brain cells she can’t seem to get over Mac, and then Grady promptly started going out with Lex.

As the performance of the show approaches, Chloe must find a way to navigate all the messy elements of her life and make it through to the end of the year.

Praise For The Year of Living Awkwardly: Sophomore Year…

"Chloe Snow's Diary goes far beyond the expected awesomeness + angst of a freshman in high school, though it has both of those qualities in spades. But Chloe Snow, in all her hilarious brilliance, will also break your heart and make you bawl those "happy to be alive" tears. Amazing."


— Lauren Myracle, New York Times bestselling author of The Infinite Moment of Us

Chloe Snow has a lot going on in her sophomore year, and you know she’s bringing her diary along wherever she goes! Chastain (Confessions of a High School Disaster, 2017) unquestionably taps into the psyche of a sophomore girl’s mind, and it feels effortless. For those who kept diaries while growing up, Chloe is remarkably relatable. This sequel doesn’t further the plot in any drastic way, but this is part of what makes it feel so genuine. Chloe is still dealing with many of the same issues: her parents’ separation, her father’s new girlfriend, social-hierarchy politics, and of course, boys. Chloe is acutely self-aware, writing: “And yet all I do is whine and obsess about myself.” The diary format necessitates this fact; she’s writing in a book about herself almost every day. In actuality, what she does is realistically demonstrate the complicated balance of self-centeredness and empathy that high school demands. There are few protagonists who are written as believable and endearing as Chloe Snow. — Caitlin Kling
— Booklist

Emma Chastain is a graduate of Barnard College and the creative writing MFA program at Boston University. She lives in Brooklyn with her husband and children.
Loading...
or
Not Currently Available for Direct Purchase