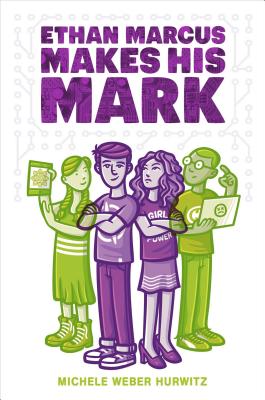 Readers with siblings will appreciate this story about rivalry.
— School Library Journal on Ethan Marcus Stands Up

The shifting narration (among Ethan and Erin, their two best friends, and the outcast who joins Ethan in Reflection) is smartly effective at giving insight into the friction between brother and sister over the science fair and beyond, and the point that you can’t externally see what drives people is a helpful nudge to empathy.  . . . a thoughtful next step for readers of Andrew Clements.
— BCCB on Ethan Marcus Stands Up

Hurwitz captures sibling rivalry with insight and humor; tweens will see themselves, their friends, and frenemies in the characters and identify with the middle-school life and drama. Voice is important here, adding dimension and raising tension as narration shifts between Erin’s, Ethan’s, and Marlon’s perspectives. This entertaining sequel to Ethan Marcus Stands Up (2017) begs for a comfy reading corner where laughs are permitted."
— Booklist

Michele Weber Hurwitz is the author of several books for young readers. The Summer I Saved the World…in 65 Days was nominated for a 2015–16 Pennsylvania Young Readers’ Choice Award. Calli Be Gold was nominated for a 2015–16 Minnesota Youth Reading Award and was on the 2014 Bluestem Readers’ Choice Award nomination list in Illinois. It also was named a starred Best Book by the Bank Street College of Education. She is also the author of Ethan Marcus Stands Up and Ethan Marcus Makes His Mark. She lives in the Chicago area.
Loading...
or
Not Currently Available for Direct Purchase