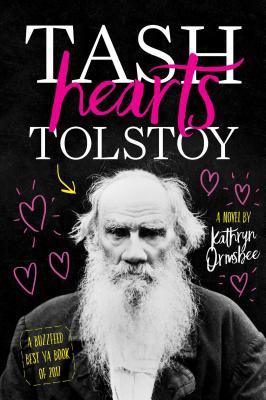 From the author of Lucky Few comes a “refreshing” (Booklist, starred review) teen novel about Internet fame, peer pressure, and remembering not to step on the little people on your way to the top!

After a shout-out from one of the Internet’s superstar vloggers, Natasha “Tash” Zelenka suddenly finds herself and her obscure, amateur web series, Unhappy Families, thrust in the limelight: She’s gone viral.

Her show is a modern adaption of Anna Karenina—written by Tash’s literary love Count Lev Nikolayevich “Leo” Tolstoy. Tash is a fan of the 40,000 new subscribers, their gushing tweets, and flashy Tumblr gifs. Not so much the pressure to deliver the best web series ever.

Kathryn Ormsbee grew up with a secret garden in her backyard and a spaceship in her basement. She is the author of The Water and the Wild, The Doorway and the Deep, and The House in Poplar Wood and the YA novels Lucky Few, Tash Hearts Tolstoy, The Great Unknowable End, and The Sullivan Sisters. She’s lived in lots of fascinating cities, from Birmingham to London to Seville, but she currently lives in Eugene, Oregon.

"[A] spot-on narrative voice, make this a compassionate and frank look into challenges that can seem to fly at teenagers from all directions."
— Publishers Weekly
or support indie stores by buying on
Copyright © 2020 American Booksellers Association