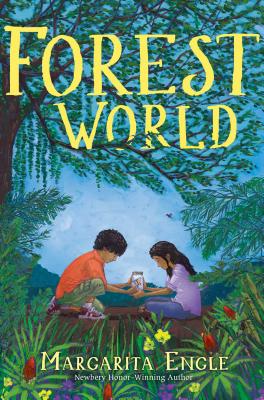 From award-winning author Margarita Engle comes a lively middle grade novel in verse that tells the story of a Cuban-American boy who visits his family’s village in Cuba for the first time—and meets a sister he didn’t know he had.

Edver isn’t happy about being shipped off to Cuba to visit the father he barely knows. The island is a place that no one in Miami ever mentions without a sigh, but travel laws have suddenly changed, and now it’s a lot easier for divided families to be reunited. Technology in Cuba hasn’t caught up with the times, though, and Edver is expecting a long, boring summer.

He was NOT expecting to meet a sister he didn’t know he had. Luza is a year older and excited to see her little brother, until she realizes what a spoiled American he is. Looking for something—anything—they might have in common, the siblings sneak onto the Internet, despite it being forbidden in Cuba, and make up a fake butterfly. Maybe now their cryptozoologist mother will come to visit. But their message is intercepted by a dangerous poacher, and suddenly much more than their family is at stake. Edver and Luza have to find a way to overcome their differences to save the Cuban jungle that they both have grown to love.