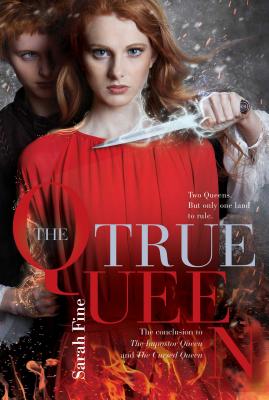 The True Queen (The Impostor Queen #3)

Using fire and ice magic, Elli and Ansa must bring their people together to fight a common enemy in this epic conclusion to the Impostor Queen trilogy, which is a perfect fit for “fans of Victoria Aveyard’s Red Queen” (School Library Journal).

Now that Ansa knows she is the destined queen of Kupari, she is desperate to find a permanent home for her people, the Kriegere, in the Kupari lands. But as the small band of warriors crosses into the foreign territory, Ansa loses her fragile grip on her newly-acquired—and violent—fire and ice magic and puts everyone, including her love Thyra, in danger.

Inside the walls of Kupari, Elli maintains the facade that she is the magical queen, with her secret—that she has no magic at all—on the brink of exposure every day. But as she tries to prepare the citizens to protect themselves from another invasion, unrest spreads as wielders like her beloved Oskar begin to lose control of their powers.

As Kupari grows increasingly unstable, with the land literally crumbling beneath their feet, and a common enemy once again threatening everything, these two young women on a collision course with destiny must find a way to save the realm and their people from total destruction.

In this epic conclusion to the Impostor Queen series, Sarah Fine’s sweeping tale of two fierce leaders imbued with unimaginable power and called to unthinkable sacrifice finally answers the question: who has the strength to be the True Queen?

Praise For The True Queen (The Impostor Queen #3)…

"In this satisfying conclusion to the Impostor Queen trilogy, two strong female characters rise to their potentials and duties. As in the previous two volumes, the action is constant, the characters are well drawn, and the story is unique. Love and loss carry the day, while courage rises triumphantly."
— Booklist

Sarah Fine is the author of Of Metal and Wishes, Of Dreams and Rust, The Impostor Queen, The Cursed Queen, The True Queen, and The Guards of the Shadowlands series. She was born on the West Coast, raised in the Midwest, and is now firmly entrenched on the East Coast. When she’s not writing, she’s working as a child psychologist. Visit her at SarahFineBooks.com.
Loading...
or support indie stores by buying on
(This book is on backorder)