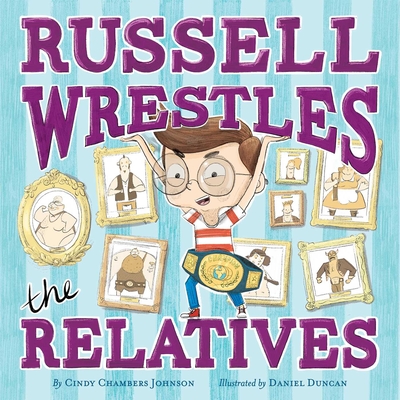 Everyone loves family reunions. Well everyone except Russell, whose family of big, brawny, and boisterous wrestlers has him on the run in this vibrant celebration of what it means to be a family.

When the Relatives Came meets Wrestlemania in debut author Cindy Chambers Johnson’s rollicking picture book about a family reunion with a most colorful cast of characters—from Lorry and Tory (the Twin Tornadoes) to Cousin Cora “The Cleaner” to Uncle “el monstruo” Marcoy.

Family reunions mean lots of hugging, handshaking, and hair tousling. And Russell’s relatives? Well, they are more…enthusiastic than most. BIGGER than most. BRAWNIER than most. They’re wrestlers! Skinny and scrawny Russell will have to meet, greet, and defeat this clan with some spectacular moves of his own!

Cindy Chambers Johnson grew up in Hutchinson, Kansas, where she received her fair share of Kansas Crusher hugs and visits from far-flung relatives. (None of whom wrestled for a living—thank goodness.) Cindy’s interest in family ties and inherited traits led her to a career as a genetic counselor, but a love of reading and writing passed down from her mother led to her career as an author. Cindy now lives with her husband and two children in Des Moines, Iowa, and only administers the Texas Tickle Hold when absolutely necessary.

Daniel Duncan is an illustrator living in the UK who creates most of his work in an old stable turned studio. His work takes inspiration from cinema, old photos, and sports. Duncan graduated from Middlesex University with First Class Honours, and a bachelor’s degree in illustration. He was highly commended by Macmillan for the 2013 Children’s Book Competition, as well as being shortlisted for the 2014 AOI awards for the Children’s Books New Talent category.
or support indie stores by buying on