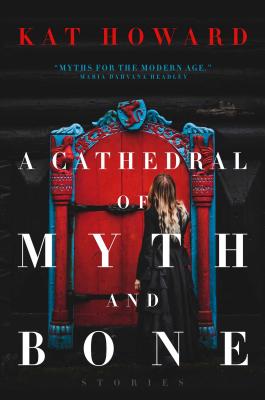 A Cathedral of Myth and Bone (Hardcover)

Kat Howard has already been called a “remarkable writer” by Neil Gaiman and her “dark and enticing” (Publishers Weekly) debut novel, Roses and Rot, was beloved by critics and fans alike.

Now, you can experience her collected shorter works, including two new stories, in A Cathedral of Myth and Bone. In these stories, equally as beguiling and spellbinding as her novels, Howard expands into the enchanted territory of myths and saints, as well as an Arthurian novella set upon a college campus, “Once, Future,” which retells the story of King Arthur—through the women’s eyes.

Captivating and engrossing, and adorned in gorgeous prose, Kat Howard’s stories are a fresh and stylish take on fantasy. “Kat Howard seems to possess a magic of her own, of making characters come alive and scenery so vivid, you forget it exists only on the page” (Anton Bogomazov, Politics and Prose).

Kat Howard’s short fiction has been nominated for the World Fantasy Award, anthologized in best of and annual best of collections, and performed on NPR. She is the author of the critically acclaimed Roses and Rot and the Alex Award–winning An Unkindness of Magicians. She is also the writer of the Books of Magic series, set in the Sandman Universe. She lives in New Hampshire, and you can find her on twitter at @KatWithSword.
or
Buy Here
Copyright © 2020 American Booksellers Association