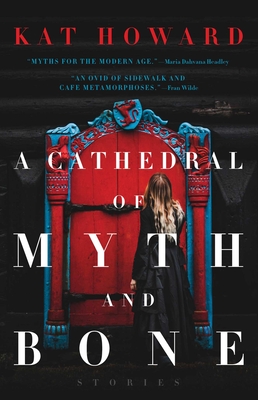 A Cathedral of Myth and Bone

Kat Howard has already been called a “remarkable writer” by Neil Gaiman and her “dark and enticing” (Publishers Weekly) debut novel, Roses and Rot, was beloved by critics and fans alike.

Now, you can experience her collected shorter works, including two new stories, in A Cathedral of Myth and Bone. In these stories, equally as beguiling and spellbinding as her novels, Howard expands into the enchanted territory of myths and saints, as well as an Arthurian novella set upon a college campus, “Once, Future,” which retells the story of King Arthur—through the women’s eyes.

Captivating and engrossing, and adorned in gorgeous prose, Kat Howard’s stories are a fresh and stylish take on fantasy. “Kat Howard seems to possess a magic of her own, of making characters come alive and scenery so vivid, you forget it exists only on the page” (Anton Bogomazov, Politics and Prose).

Praise For A Cathedral of Myth and Bone: Stories…

"There is magic in this book. You just have to crack it open."
— Spectrum Culture

"Kat Howard's short stories are by turns revelatory, transformative, and magical -- and often all three at once. Howard writes a modern mythos where her heroines and heroes (no matter how familiar the setting seems, Howard's characters are never mere protagonists) confront curses, magic, love, madness, and the supernatural. They emerge stronger, as does the reader. I dare you to read these stories and not look at your life differently afterward.

With A Cathedral of Myth and Bone, Kat Howard cinches her place as a new generation's vividly different answer to Zelazny; as an Ovid of sidewalk and cafe metamorphoses; and as a vibrant voice very much of her own time and place."
— Fran Wilde, award-winning, Hugo and Nebula-nominated author of The Bone Universe series and The Jewel and Her Lapidary

“Sidewalk saints and scholarly sorceresses populate Kat Howard's collection of new stories for old ceremonies. The ferocious bonds of girls and women are the focus of these myths for the modern age, drawn from two thousand years of lore, ritual, and witness. In them, Howard has created enchanted narratives of hard-won survival.”
— Maria Dahvana Headley, author of The Mere Wife

Kat Howard’s short fiction has been nominated for the World Fantasy Award, anthologized in best of and annual best of collections, and performed on NPR. You can find it in her collection, A Cathedral of Myth and Bone. She is the author of the critically acclaimed Roses and Rot and the Alex Award–winning An Unkindness of Magicians. She is also one of the writers of the Books of Magic series, set in the Sandman Universe. She lives in St. Paul, Minnesota, and you can find her on twitter at @KatWithSword.
Loading...
or support indie stores by buying on