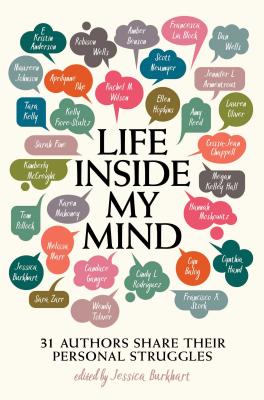 Your favorite YA authors including Ellen Hopkins, Maureen Johnson, and more recount their own experiences with mental illness in this raw, real, and powerful collection of essays that explores everything from ADD to PTSD.

Life Inside My Mind is an anthology of true-life events from writers of this generation, for this generation. These essays tackle everything from neurodiversity to addiction to OCD to PTSD and much more. The goals of this book range from providing home to those who are feeling alone, awareness to those who are witnessing a friend or family member struggle, and to open the floodgates to conversation.

In this much-needed, enlightening book, 31 young adult authors write candidly about mental health crises, either their own or that of someone very close to them. Ranging from humorous to heartbreaking to hopeful, each story has a uniquely individual approach to the set of circumstances that the writer is dealing with. Many authors address readers in the second person, inviting them to imagine what it’s like to live a day inside their heads. The symptoms of anxiety, depression, obsessive-compulsive disorder, and addiction are frequently discussed. Readers will learn of the many different ways these conditions can be present and in which they often work together. Despite the intense emotional content, teens will warm to the authenticity apparent in every voice. Many, if not most of the essays offer a list of the techniques and treatments that have been successful in handling symptoms, including medication, therapy, exercise, and yoga. The difficulty in recognizing mental health issues, as well as the unfortunate stigma associated with asking for help, is frequently acknowledged and may help teen and adult readers work toward achieving a more open dialogue. Perhaps most importantly, the collection’s overarching sentiment points toward acceptance and the idea that treatment is a journey. As contributor Tara Kelly writes: “If anxiety gets the better of me again, that’s okay. I give myself permission to fall down and get back up.” VERDICT A first purchase for all young adult collections.
— School Library Journal, STARRED REVIEW