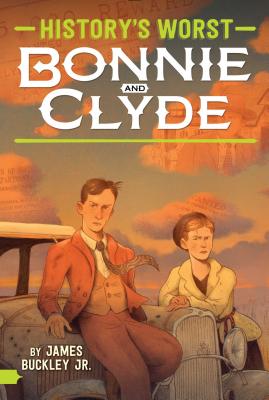 Get a behind-the-scenes glimpse of what it takes to be considered two of the worst figures in history, with the third book in this nonfiction series that focuses on the most despicable historical figures.

Bonnie Parker and Clyde Barrow are possibly the most famous and most romanticized criminals in American history. When the police found photos of them posing with guns and goofing around, they became media darlings. However, their fame was short-lived, and their lives would end in a violent police ambush.

Because the reality was very different. During their 1930s crime spree, the two young Texans and the rest of their gang lived a vicious life filled with narrow escapes, bungled robberies, injuries, and murders. And they weren’t the only gangsters operating at the time. Criminals like Al Capone, Charles “Pretty Boy” Floyd, and “Ma” Barker grabbed their own share of headlines, but in the end it was Bonnie and Clyde who really captured the public’s imagination. A lot of that was because of Bonnie herself. The cute, blonde criminal was unique at the time.

There is no question that their story continues to fascinate writers, musicians, visual artists, and filmmakers. But is that fascination justified? Or are we confusing the movie images with reality and ignoring the ugly truth of their story?

James Buckley Jr. is a prolific author of nonfiction for young readers. Bonnie and Clyde joins a long list of his biographies that cover Adolf Hitley, Milton Hershey, Betsy Ross, Jesse Owens, Muhammad Ali, and Roberto Clemente, among many others. Other recent books include titles on the International Space Station, the Moon, snakes, insects, firefighters, history, and sports of various kinds. That latter subject is a big part of his work, following on a career in sports journalism with Sports Illustrated and the National Football League. He is the owner of Shoreline Publishing Group, a book packager based in his home of Santa Barbara, California, where he lives with his wife and two teenagers.
or
Buy Here
Copyright © 2020 American Booksellers Association