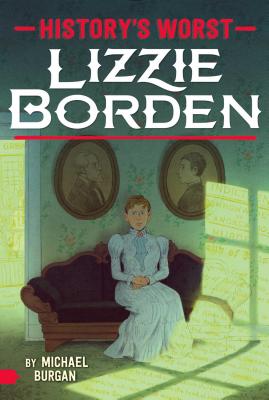 Get a behind-the-scenes glimpse of what it takes to be considered one of the worst figures in history, with this fourth book in a nonfiction series that focuses on the most nefarious historical figures.

Lizzie Borden took an axe, gave her mother forty whacks.
When she saw what she had done, she gave her father forty-one.

On August 4, 1892, the murders of wealthy and prominent Andrew and Abby Borden rocked the small town of Fall River, Massachusetts. The accused? Mild-mannered and highly respected Lizzie Borden, daughter of Andrew and stepdaughter of Abby. But did she actually do it? And if she did, why?

Lizzie had as much to gain from the death of her father as anyone. Despite his wealth, Andrew did not believe in spending money and Lizzie had grown frustrated with the situation. And her actions in the days before the murder—trying to buy a type of strong poison—as well as those after the murder—burning a dress she claimed was stained—didn’t help. On August 11, Lizzie was arrested. But after a sensational trial, she was found not guilty.

Michael Burgan has written numerous books for children and young adults. Many of his books have focused on US history, geography, and the lives of world leaders. He has also written fiction and adapted classic novels. Michael has won several awards for his writing, and his graphic novel version of the classic tale Frankenstein (Stone Arch Books) was a Junior Library Guild selection. Michael graduated from the University of Connecticut with a bachelor’s degree in history. When not writing for kids, he enjoys writing plays, and his works have been staged across the United States. He lives in Santa Fe, New Mexico, with his cat, Callie.
or
Not Currently Available for Direct Purchase
Copyright © 2020 American Booksellers Association