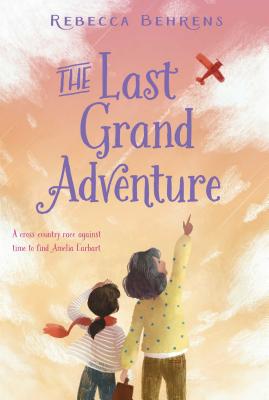 Twelve-year-old Bea finds herself on a unique road trip with her grandmother, as they search for her grandmother’s long-lost sister—the legendary Amelia Earhart—in this charming novel from the author of When Audrey Met Alice and Summer of Lost and Found.

It’s 1967 and twelve-year-old Bea is in need of some adventure. Her mother is off in San Francisco, while her father has just gotten remarried in Los Angeles. Bea has gained a younger stepsister, and she’s not thrilled about her blended family. So when her ailing grandmother, Pidge, moves to an Orange County senior-living community and asks if Bea would spend the summer helping her get settled, Bea is happy for any excuse to get away.

But it turns out, her grandmother isn’t interested in settling in. What she really wants is to hop a train back to Atchison, Kansas—where she thinks she’ll be reunited with her long-missing sister: Amelia Earhart. And she wants Bea to be her sidekick on this secret trip.

At first, Bea thinks her grandmother’s plan is a little crazy. But Pidge has thirty years of letters written in “Meelie’s” unmistakable voice, all promising to reunite. This might be the adventure Bea needs…

With letters in hand, Bea and Pidge set off on their quest to find Amelia. But getting halfway across the country proves to be more of an adventure than either of them bargained for. And their search for Amelia leads to some surprising truths about their family—and each other.

Rebecca Behrens lives and writes in New York City, where she also works as a textbook editor. She is the author of When Audrey Met Alice, which BookPage called “a terrific work of blended realistic and historical fiction,” Summer of Lost and Found, which Kirkus Reviews said “this blend of history with mystery and fantasy with realism is a good find indeed,” and The Last Grand Adventure. Some of Rebecca’s favorite things are: the beach, history, running, doughnuts, and laughing.

Praise For The Last Grand Adventure…

The bond between sisters—not to mention grandmother and granddaughter—sets in motion a quirky, heart-rending journey and a discovery that could either change history or crush a dream. Beatrice is not a risk taker. Not like her journalist mom, who, since divorcing Bea's dad, is constantly on the move, searching for her next big story. Bea, 12, feels abandoned and resentful living with her dad and his new wife, Julie, and her irritating, adoring younger stepsister, Sally. Which is why, when she spends time with her free-wheeling grandmother, Bea feels herself swept away by the older woman's sense of adventure. Besides, adventure runs in grandma's blood. How could it not? After all, Muriel—call her "Pidge"—is the sister of long-lost aviatrix Amelia "Meelie" Earhart. In an imaginative tale set in 1967, grandma Pidge takes her granddaughter on a journey to finally discover what happened to her long-lost sister 30 years before. Or is the journey fueled by something more? Pidge, who shares letters she has received from Meelie, is showing signs of being unwell. Is she ill or simply fatigued? Despite bouts of forgetfulness, Pidge's persistence encourages Bea (and readers) to want to believe even as the story hurtles toward a heartbreakingly surprising if inevitable conclusion. Bea's intelligent, believable voice leads readers through a narrative sprinkled with period references and interspersed with Meelie's handwritten letters. Infused with warmth and brightly developed characters and locales, Bea's adventure makes for a satisfying read. (Historical fiction. 8-12)
— Kirkus

Historical fiction lovers are in for a treat with this heartfelt tale of discovery and hope. Twelve-year-old Bea is living unhappily with her newly blended family after her parents’ divorce—young stepsister Sally particularly annoys her, and she misses her traveling reporter mother. Still, she’s nervous to spend several weeks with Pidge, her grandmother, about whom she knows little. Despite warnings to be wary of unusual, forgetful behavior, Bea agrees to join Pidge on a secret, half-baked journey from California to her childhood home in Kansas in hopes to be reunited with her long-lost sister, Amelia Earhart. Pidge has been receiving mysterious letters from Meelie for decades and believes she is still alive. Bea, intrigued with the family mystery and warming to her grandmother’s quirks, supports her as they stow away, hitchhike, and take to the skies in a desperate attempt to reach Kansas—despite Bea’s nagging suspicion about the letters’ authenticity. This story has much to love, from the touching development of Bea and Pidge’s relationship to Bea conquering her fears and discovering the appeal of adventure. Bea even sees her stepsister in a new light as she witnesses the bond between Pidge and Meelie that transcends time and space. Young history buffs will appreciate the back matter, including a historical author’s note, selected bibliography, and list of which quotes in the book are authentic. VERDICT An excellent purchase for readers who enjoy a strong dose of adventure and solid character development in their historical fiction.
— School Library Journal
or
Buy Here
Copyright © 2020 American Booksellers Association