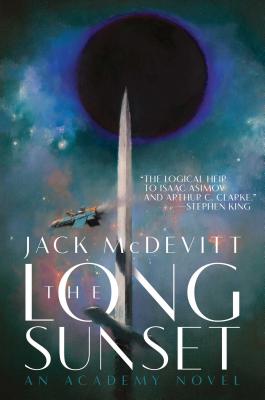 Praise For The Long Sunset (The Academy)…

"Despite its placement in the 23rd century, this long but accessible and optimistic eighth volume in McDevitt’s series featuring interstellar pilot Priscilla “Hutch” Hutchins recounts a very timely victory for scientific advancement and universal compassion over xenophobia. Academy fans will appreciate this solid addition to the series."
— - Publishers Weekly

" An ideal candidate for book club type discussions, this is the kind of literature that science fiction fans love to debate. The Long Sunset continues the author’s long-standing prominence in influential works of science fiction."
— - Amazing Stories

"A solidly engrossing entry in this agreeable and reliable series."
— - Kirkus Reviews

"McDevitt offers a unique take on aliens and how civilizations might arise on other planets, an unexpected and interesting choice in the realm of space-based science fiction."
— - Booklist

"McDevitt’s realistic approach to crafting a future where the galaxy is open to us but possibly beyond our ability to comprehend has made him a distinct, welcome voice in the gene,and whether you’re a longtime fan or a first time reader, this is a classic space adventure in the best sense of the term."
— - B&N Sci-Fi & Fantasy Blog

Jack McDevitt is the Nebula Award–winning author of The Academy series, including The Long Sunset. He attended La Salle University, then joined the Navy, drove a cab, became an English teacher, took a customs inspector’s job on the northern border, and didn’t write another word for a quarter-century. He received a master’s degree in literature from Wesleyan University in 1971. He returned to writing when his wife, Maureen, encouraged him to try his hand at it in 1980. Along with winning the Nebula Award in 2006, he has also been nominated for the Hugo Award, the Nebula Award, the Arthur C. Clarke Award, the John W. Campbell Memorial Award, and the Philip K. Dick Award. In 2015, he was awarded the Robert A. Heinlein Award for Lifetime Achievement. He and his wife live near Brunswick, Georgia.
Loading...
or
Not Currently Available for Direct Purchase