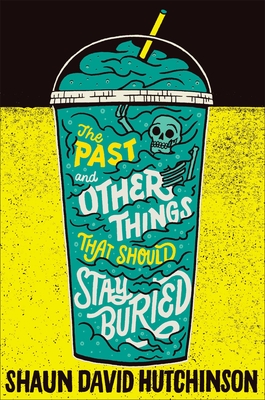 The Past and Other Things That Should Stay Buried

Gr 8 Up–A brain aneurysm killed July Cooper, but it can’t destroy her bond with Dino DeLuca. July rises from the dead at the funeral home owned by Dino’s family, and though the two teens had been on the outs for the past year, they are drawn together as they attempt to conceal July’s reanimation. What ensues is messy. July’s body is slowly rotting, and the two trade barbed words while untangling why their friendship ended after Dino met his boyfriend, Rafi. Once again, Hutchinson defies genres. This isn’t a ghost story, and July isn’t a zombie, as she frequently points out. But she can’t eat, she has no heartbeat, and until she’s finally laid to rest, nobody else can die. This inventive take on the life-after-death narrative ponders profound truths. It’s the ones who love us the most who can inflict the deepest wounds and hold us back, but even bitter fights can’t extinguish some connections. Like typical adolescents, uncertain Dino and snarky July seem wise beyond their years one moment and maddeningly immature the next, and their journeys to self-discovery will resonate with readers. VERDICT A grotesque, mordantly funny, and tender look at friendship, for fans of Aaron Starmer’s Spontaneous and Adam Silvera’s They Both Die at the End.–Mahnaz Dar, School Library Journal
— School Library Journal STARRED REVIEW