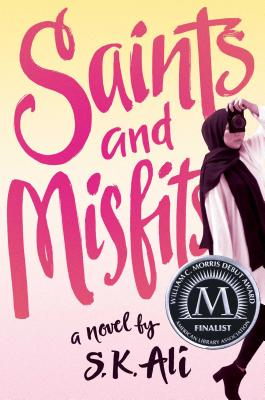 Praise For Saints and Misfits…

*"Ali pens a touching exposition of a girl's evolution from terrified victim to someone who knows she's worthy of support and is brave enough to get it. Set in a multicultural Muslim family, this book is long overdue, a delight for readers who will recognize the culture and essential for those unfamiliar with Muslim experiences. This quiet read builds to a satisfying conclusion; readers will be glad to make space in their hearts—and bookshelves—for Janna Yusuf."
— Kirkus Reviews, STARRED REVIEW

*"This timely and authentic portrayal is an indisputable purchase in the realistic fiction category."

*"Ali’s debut offers a much-needed, important perspective in Janna, whose Muslim faith is pivotal but far from the only part of her multifaceted identity. . . . For readers unfamiliar with Muslim traditions, Ali offers plenty of context clues and explanations, though she always keeps the story solidly on Janna’s struggle to maintain friendships, nurse a crush, deal with bullies and predatory people in her life, and discover her own strength in the process. A wide variety of readers will find solidarity with Janna, and not just ones who wear a hijab."
— Booklist, STARRED REVIEW

"[A] sympathetic and thoughtful study of a girl’s attempt to find her place in a complicated world."
— Publishers Weekly

"Ali brings to life a nuanced intersection of culture, identity, and independence as Janna endures the typicalities of high school and the particularities of her evolving home life alongside the insidious impingement of rape culture. Readers will cheer Janna’s eventual empowerment."
— Horn Book

"[R]eaders . . .will appreciate Janna’s finding of a way to embrace her anger, receive support, and keep her faith. "
— Bulletin of the Center for Children's Books

“Saints and Misfits is an engaging portrayal of a young woman and the abundance of differing, loving people who make up her extended family.”
— Shelf Awareness

S. K. Ali is the author of Saints and Misfits, a finalist for the American Library Association’s 2018 William C. Morris Award and the winner of the APALA Honor Award and Middle East Book Honor Award; and Love from A to Z, a Today show Read with Jenna Book Club selection. Both novels were named best YA books of the year by various media including Entertainment Weekly and Kirkus Reviews. She is also the author of Misfit in Love and Love from Mecca to Medina. You can find Sajidah online at SKAliBooks.com and follow her on Instagram @SKAliBooks, TikTok @SKAliBooks, and on Twitter at @SajidahWrites.
Loading...
or support indie stores by buying on