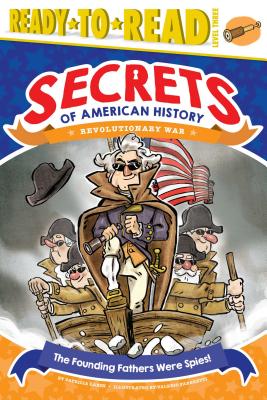 The Founding Fathers Were Spies!

Discover the thrilling side of history—starting with how spies helped during the Revolutionary War—in this fact-tastic, nonfiction Level 3 Ready-to-Read, part of a new series about the secrets of American History!

Secrets of American History is an action-packed nonfiction Level 3 Ready-to-Read series that lets beginning readers in on a little secret: history is full of surprises! Want to know what invisible ink has to do with the American Revolution? Or why shark repellant and inflatable army tanks were used in World War II? Find out in this fact-filled series of fascinating true tales, wild adventures, and spy missions, and discover the secret side of American history!

Before he was the President of the United States, George Washington was a spy! It’s true…and he wasn’t the only one! During the American Revolution, founding fathers like Alexander Hamilton and Benjamin Franklin sent secret messages rolled up in quill pens, used invisible ink, and wrote in secret codes to keep important information from getting into British hands. In George Washington’s top-secret spy ring, a woman named Anna Strong sent secret messages to other spies by hanging laundry on a clothesline!

Without spies, Americans might still speak with British accents: find out how and why it happened in this book that includes a special extend-the-learning section with activities about the science behind invisible ink, how to make a secret code, and more!

Patricia Lakin, a former elementary school teacher and an award-winning author, has written more than fifty published works. Her books, both fiction and nonfiction, span multiple age groups—from toddlers to middle graders. Patricia lives in New York City with her husband, Lee Koenigsberg. They have two grown sons, Aaron and Benjahmin. When not reading, writing, or researching, she can be found traveling with Lee to far-off places in the world.

Valerio Fabbretti is passionate about drawing, comic books, animation, and spaghetti westerns. He has illustrated children's books and comic books in the US and in Italy. Valerio was born in Rome, but studied illustration in San Francisco, where he is currently living and working.
Loading...
or support indie stores by buying on