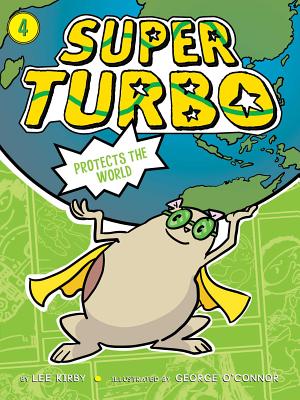 When evil Whiskerface sees the perfect chance to test his plan to take over the world, it’s up to the superpets to stop him in this fourth Super Turbo book.

Sunnyview Elementary has been buzzing with excitement and smelling like…bratwurst? That’s because the students are preparing for “Celebrate the World Day,” where each classroom represents a different country. The members of the Superpet Superhero League are helping out behind the scenes. But the evil Whiskerface is working behind the scenes, too. After all, what better time and place to test out his plan to take over the world? Will the superpets be able to stop Whiskerface from ruining the celebration?

George O’Connor is the creator of the New York Times bestselling graphic novel series Olympians, in addition to serving as the illustrator of the Captain Awesome series. He is also the author and illustrator of the picture books Kapow!, Ker-splash, and If I Had a Triceratops. He resides in his secret Brooklyn, New York, hideout, where he uses his amazing artistic powers to strike fear in the hearts of bad guys everywhere!
Loading...
or
Not Currently Available for Direct Purchase