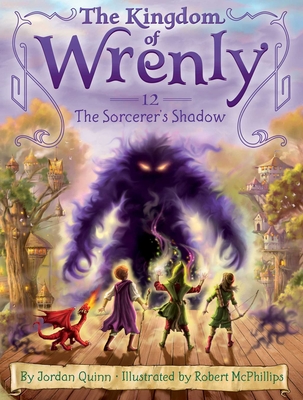 The Sorcerer's Shadow (The Kingdom of Wrenly #12)

In the twelfth fantastical book from The Kingdom of Wrenly series, Prince Lucas and Clara go on an adventure in the forest realm of Trellis!

All is not right in the forest realm of Trellis. Birds have left their nests and bears have abandoned their dens, as a mysterious magic threatens the natural order of the deep, dark woods. Together with a band of knights, Prince Lucas and Clara set out on an adventure that pits them against a dreaded sorcerer’s shadow. There’s only one problem: How can a shadow be defeated?

Jordan Quinn grew up in a fairy tale castle in England. It had a spiral stone staircase, a moat, and a dungeon. As a child she liked to play hide-and-go-seek and ride her beloved horse, Prince Charming. When she wasn’t riding, she wrote stories about fairies, trolls, dragons, and wizards. Today, Jordan lives on a ranch in California with her husband, son, and a golden retriever named Sir Toots-a-Lot.

Robert McPhillips has been involved in a wide variety of projects over the years—from illustrating greeting cards to animation, though he especially loves illustrating children’s books. Robert makes his home in North Devon, England, with his wife, Sam.
Loading...
or support indie stores by buying on