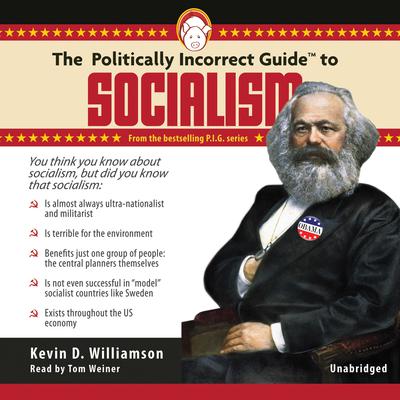 Liberals scoff when conservatives denounce Obama and his policies as socialist. After all, they argue, Obama isn't Stalin and America is nothing like the Soviet Union. But socialism doesn't always resemble the Berlin Wall or the Iron Curtain, as National Review editor Kevin Williamson proves in his new book, The Politically Incorrect Guide to Socialism. In this new PI Guide, Williamson reveals the truth: despite what the liberal politicians and leftist pundits would have you believe, the policies coming out of Washington today are nothing more than socialism disguised as equality and justice for all. Tracing socialism back to its roots, Williamson defines this misunderstood ideology, explains the different forms socialism takes on, and shows how it is thriving right here in the United States in the form of "Obamacare," financial regulations, and more. Offering conservatives the political and rhetorical ammunition they need to combat the liberal lies about one of the most misunderstood ideologies in modern history, The Politically Incorrect Guide to Socialism reveals why everything socialism purports to do, the free market does better.
Loading...