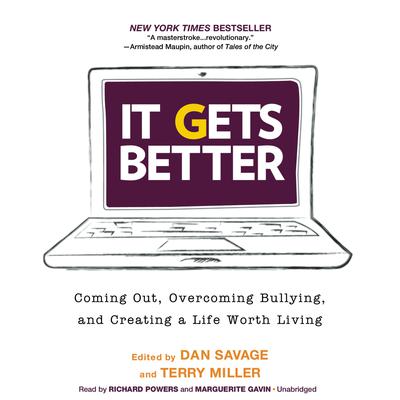 It Gets Better (Digital Audiobook)

Every story can change a life. Growing up isn't easy. Many young people face daily tormenting and bullying, making them feel like they have nowhere to turn. This is especially true for LGBT kids and teens who often hide their sexuality for fear of being bullied. Without other openly gay adults and mentors in their lives, they can't imagine what their future may hold. In many instances, gay and lesbian adolescents are taunted-even tortured-simply for being themselves. After a number of tragic suicides by LGBT students who were bullied in school, syndicated columnist and author Dan Savage uploaded a video to YouTube with his partner, Terry Miller, to inspire hope for LGBT youth facing harassment. Speaking openly about the bullying they suffered as teenagers and how they both went on to lead rewarding adult lives, they launched the It Gets Better Project YouTube channel and initiated a worldwide phenomenon. With over six thousand videos posted and over twenty million views in the first three months alone, the world has embraced the opportunity to provide personal, honest, and heartfelt support for LGBT youth everywhere. It Gets Better is a collection of expanded essays and new material from celebrities, everyday people, and teens who have posted videos of encouragement, as well as new contributors who have yet to post videos to the site. While many of these teens couldn't see a positive future for themselves, others can. We can show LGBT youth the levels of happiness, potential, and positivity their lives will reach if they can just get through their teen years. By sharing these stories, It Gets Better reminds teenagers in the LGBT community that they are not alone-and it WILL get better.