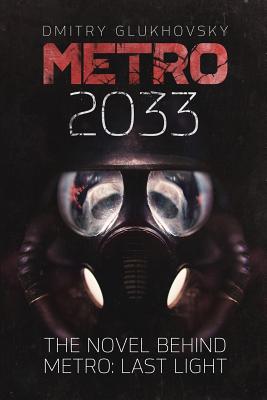 he novel that gave birth to the video games 'Metro 2033' and 'Metro: Last Light' The breathtaking original story that inspired both the METRO 2033 and METRO: LAST LIGHT video games An international bestseller, translated into 35 languages. Set in the shattered subway of a post apocalyptic Moscow, Metro 2033 is a story of intensive underground survival where the fate of mankind rests in your hands. In 2013 the world was devastated by an apocalyptic event, annihilating almost all mankind and turning the earth's surface into a poisonous wasteland. A handful of survivors took refuge in the depths of the Moscow underground, and human civilization entered a new Dark Age. The year is 2033. An entire generation has been born and raised underground, and their besieged Metro Station-Cities struggle for survival, with each other, and the mutant horrors that await outside. Artyom was born in the last days before the fire. Having never ventured beyond his Metro Station-City limits, one fateful event sparks a desperate mission to the heart of the Metro system, to warn the remnants of mankind of a terrible impending threat. His journey takes him from the forgotten catacombs beneath the subway to the desolate wastelands above, where his actions will determine the fate of mankind. BURIED. ALIVE. It is now two decades since the planet was convulsed by the Final War, which flashed across the continents, engulfing all of them in an instant, to close the final chapter in our history. Deployed in this war, the most advanced inventions and greatest discoveries of the human genius drove the human race back into caves, submerging civilization forever in the impenetrable gloom of a final Dark Age. Nowadays, in the year 2033, no one can recall any longer what triggered the hostilities. Absurd. But if you think for a moment, what does it matter who started it? Those who unleashed the war were the first to die... And the inheritance they left to us was a smoldering ember that used to be called the Earth. The entire world lies in ruins. The human race has been almost completely exterminated. Even cities that were not totally demolished were rendered unfit to live in by the radiation. And the rumors say that beyond the city limits lie boundless expanses of scorched desert and dense thickets of mutated forest. But what really is there, no one knows. The airwaves are empty, and when the few radio operators who are left tune in for the millionth time to the frequencies on which New York, Paris, Tokyo and Buenos Aires once used to broadcast, all they hear is a dismal howl. More than twenty years have passed since the day when the final plane took off. Railroad tracks, corroded and pitted with rust, now lead nowhere. The great construction projects of the age were transformed into ruins without ever being completed and the skyscrapers of Chicago and Frankfurt were reduced to rubble. The historic districts of Rome lie smothered in moss and fungus, the Eiffel Tower, gnawed through by reddish-brown leprosy, has snapped in half. And the weeds of fiction and fantasy are flourishing on the memory of humankind's former glory. It is only twenty years since the war ended before it had even begun. But in those twenty years the world has changed beyond all recognition. The planet has new masters now, and the human race is condemned to huddle in burrows, consoling itself with memories. The radiation and viruses with which some human beings attempted to eradicate others have brought new creatures into the world. And now they rule by right over the desolate Earth. The mutants are far better adapted to this new world than human beings. The human era is almost over. There are not many of us left, only a few tens of thousands, out of seven billion human beings. We don't know if there were others who survived in some other place, on the other side of the world, or if we are the last humans on the planet. We live in the Moscow Metro.

Dmitry A. Glukhovsky is a Russian author and journalist known for Sci-Fi, Magic-Realism, and his exploration of social and political structures. He began writing his first novel, Metro 2033, at the age of 18, and then published it on his website in 2002, available for all to read for free. The novel has become an interactive experiment, drawing in over 3 million readers world-wide. It has since been made into a video game for the Xbox and PC, was published in Russia in 2005, and in the US in 2010. Most recently it was optioned by MGM studios. In 2007 It's Getting Darker was published, followed by Metro 2034 in 2009, Russia's best-seller that year, also available free on-line, both as text and as a collaborative art-project with Russian electronic performer Dolphin and visual-artist Anton Gretchko. This was followed in 2010 by a series of satirical stories about Russia today - Stories about Motherland. As a journalist, Dmitry Glukhovsky has worked for EuroNews TV in France, Deutsche Welle, and RT, (the first Russian 24/7 English-language news channel broadcasting the Russian view on global news world-wide.) He writes columns for Harper's Bazaar, l'Officiel and Playboy. Currently living in Moscow, Glukhovsky has lived in Israel, Germany and France. He speaks English, French and Hebrew fluently, reads German and some Spanish, as well as his native Russian.
Loading...
or support indie stores by buying on