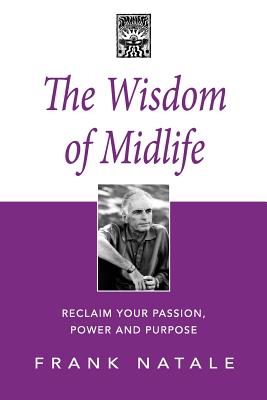 The Wisdom of Midlife

Reclaim Your Passion, Power and Purpose

It is inevitable, between the ages of 39 and 55, that each of us will be confronted with a profound crisis of identity. "Now what?" we ask. The Wisdom of Midlife presents the opportunity to reclaim the passion, power and purpose we have either lost or denied. "The difficulty with this passage is that it is seen as a breakdown, an emotional and psychological failing," Frank Natale writes. "Middle age is not the beginning of decline. This is a time to reach for the highest in our selves. Middle age is a pause to re-examine what we have done and what we will do in the future. This is the time to give birth to our power."For thousands of years, conscious cultures have celebrated life as a circular path with rites of passage and spiritual completions. Midlife is the most powerful because, at this turning point, we often feel betrayed, unfulfilled and face our mortality for the first time. "Once we are able to think and live in circles rather than lines," Natale counsels. "We are rewarded with passages that guide our consciousness in its spiritual development and greater awareness. When we experience life as a circle we are complete."Frank Natale created and presented Rites of Passage seminars throughout the United States and Europe. This book shares Natale's unique perspectives on the passages that precede midlife, from coming of age through the realization of betrayal, so we may transform this traumatic period of chaos and confusion with a clear map for conscious living. Through renewed self-awareness we embrace the priorities of integrity, forgiveness and acceptance that empower us to realize greater wisdom, creativity and joy in our lives.The Wisdom of Midlife provides context for the passages leading up to and following what Natale termed "Mid-Birth" with five concise chapters: Prerequisites for the Mid-Birth Passage, Reclaiming the Power of Consciousness, The Conscious Work of Mid-Birth, Completing the Early Traumas of Life, The Transformational Powers of Mid-Birth.

A gifted teacher and author, Frank Natale was founder and creative director of Frank Natale & Associates, an experiential education organization presenting seminars throughout the United States, Europe and Australia. Natale's teaching emphasized self-awareness, personal responsibility and choice as paths to conscious living and spiritual growth. Books by Frank Natale include The Wisdom of Midlife, Relationships for Life, and Trance Dance, The Dance of Life. Experiential life skills seminars created by Frank Natale include Trance Dance and Soul Healing; Rites of Passage, Exploring the Circle of Life's Inevitable Transformations; The One Experience; Honorable Sexuality; Alive Relationships; Results: The Willingness to Create; Creative Communications; and Self Esteem, The Power Within. Committed to dance as a healing force Natale, with his band Professor Trance, produced a body of trance dance music including the albums Shaman's Breath, Medicine Trance, Rites of Passage, Dance Your Animal, Spirit Animal and Breath of Fire. The Om Bilateral Alignment and Ambient Om meditation albums were dedicated to Baba Muktananda, Natale's spiritual teacher. A native New Yorker, in 1967 Natale co-founded Phoenix House in New York, which became the largest residential treatment facility for chemical dependency in the United States. After serving as clinical director for twelve years, Natale chose to leave Phoenix House and focus his work on successful, functioning personalities who want to experience new levels of spirituality, creativity and aliveness. During the Sixties and Seventies Natale studied and worked with many leaders of the modern human consciousness movement including Charles Dederich, Abraham Maslow, Carl Rogers, Fritz Perls, Baba Muktananda, J. Krishnamurti and Buckminster Fuller. Natale lived a conscious life and died a conscious death, passing in Hawaii on his birthday in 2002 surrounded by family and friends.
Loading...
or support indie stores by buying on