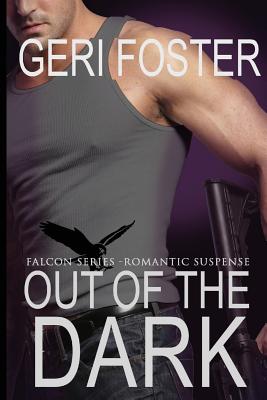 After a Russian mission goes south, Falcon Securities agent John 'Mac' McKinsey is stranded with assassins on his trail. His boss arranges for him to hitch a ride with the corporate attorney Emily Richards, who is in Russia as a mediator. Emily Richards wants only to return home then on to a peaceful vacation with her best friend. When armed men invade her hotel room minutes after Mac arrives, Emily is forced to depend on Mac to stay alive. Anger that Mac has entangled her in a life or death struggle quickly turns to fear when the men pursuing them call her by name. Together Mac and Emily engage in a tumultuous ride to escape with their lives and capture a crazed bomber and a vindictive drug lord. More difficult is tearing down their own emotional walls. Can they succeed and admit love is the most precious thing in life?

As long as she can remember, Geri Foster has been a lover of reading and the written words. In the seventh grade she wore out two library cards and had read every book in her age area of the library. After raising a family and saying good-bye to the corporate world, she tried her hand at writing. To her surprise, she won a couple of contests, hooked up with a really great critique group and her writing career was well on its way. She spent several years studying her craft and developing her voice. Action, intrigue, danger and sultry romance drew her like a magnet. That's why she has no choice but to write action-romance suspense. While she reads every genre under the sun, she's always been drawn to guns, bombs and fighting men. Secrecy and suspense move her to write edgy stories about daring and honorable heroes who manage against all odds to end up with their one true love.
Loading...
or support indie stores by buying on