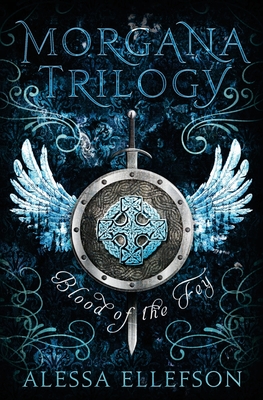 Blood of the Fey

Morgan Pendragon just wants a normal life. But on her last year at a Swiss boarding school, one of her classmates is found mysteriously dead. Before she knows it, Morgan's called home to Wisconsin, for the first time in her life.There, not only does she have to deal with her crazy-weird family, but she's forced to attend a strange school set in a magical world under Lake Winnebago. To make matters worse, she must train with the others to become Knights of the Round Table and fight in a secret, millennia-old war against the Fey--fallen angels with unimaginable powers who'd do anything to destroy humans. And if that wasn't enough, she must do the impossible: learn to make friends.As the world is falling apart, Morgan must adapt to her new reality before she either goes nuts... or finds herself dead.

Alessa Ellefson is a bit of a globe-trotter--born in Texas, she was raised first in Spain, then Belgium, before landing in the US of A to study... math (the one subject she'd vowed never to take again after graduating from high school). In terms of writing, she's tried her hand at a number of different genres, including screenwriting and poems. Blood of the Fey is her first published novel (her previous stories are tucked safely away for fear of adding more horrors to this lovely world). It is also the first in the Morgana Trilogy, though many more are jousting in her head for the next spot at the end of her pen. More information on what goes on inside Alessa's devious mind can be found at www.alessaellefson.com
Loading...
or support indie stores by buying on