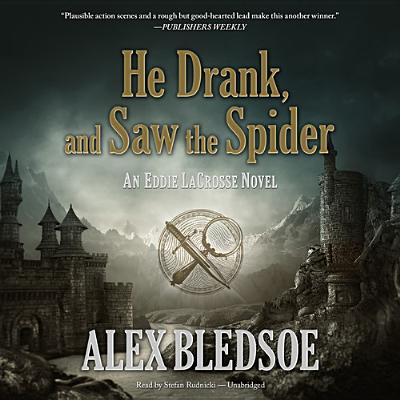 He Drank, and Saw the Spider (Eddie Lacrosse Novels (Audio) #5)

Alex Bledsoe continues the adventures of freelance sword jockey Eddie LaCrosse in the thrilling He Drank, and Saw the Spider. After he fails to save a stranger from being mauled to death by a bear, a young mercenary is saddled with the baby girl the man died to protect. He leaves her with a kindly shepherd family and goes on with his violent life. Now, sixteen years later, that young mercenary has grown up to become cynical sword jockey Eddie LaCrosse. When his vacation travels bring him back to that same part of the world, he can't resist trying to discover what has become of the mysterious infant. He finds that the child, now a lovely young teenager named Isadora, is at the center of a complicated web of intrigue involving two feuding kings, a smitten prince, a powerful sorceress, an inhuman monster, and long-buried secrets too shocking to imagine. And once again she needs his help. They say a spider in your cup will poison you but only if you see it. Eddie, helped by his smart, resourceful girlfriend Liz, must look through the dregs of the past to find the truth about the present--and risk what might happen if he, too, sees the spider.