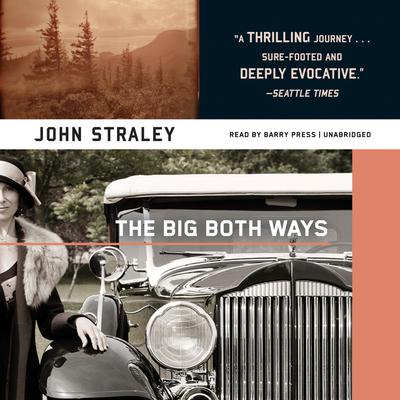 The Big Both Ways (Digital Audiobook)

It's 1935, and Slip Wilson, rattled by the gruesome accidental death of a coworker, has quit his job at a logging camp, hoping to make a clean start in Seattle. But along the way he rescues a woman and her young niece from their car in a ditch, and his life takes a hard turn. The woman, Ellie Hobbes, is an anarchist with big dreams—but first, she has to take care of that pesky dead body in the trunk of her car.

So begins the action that will take Slip, Ellie, her niece, and her noisy yellow bird on a thrilling adventure up the Inside Passage from Puget Sound to Alaska.

John Straley was
born in 1953, the youngest of five children. He received a BA in English and a
certificate of completion in horseshoeing. He enjoys jokes and a wide variety
of literature and music. He is the Shamus Award–winning author of The
Curious Eat Themselves
and The Woman Who Married a Bear and
was appointed the Writer Laureate of Alaska in 2006. Straley lives with his
wife, Jan, a prominent whale biologist, in a bright green house on the beach in
Sitka, Alaska, where he works as a criminal defense investigator by day and
sleeps, writes, and plays with his band, the Big Fat Babies, whenever he can.