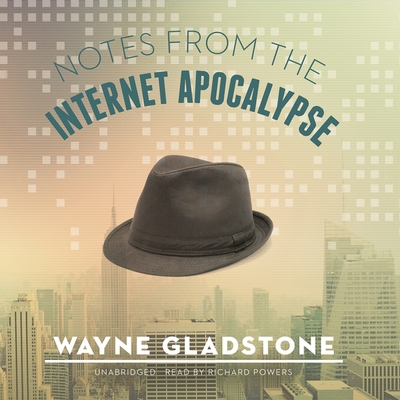 Notes from the Internet Apocalypse

When the Internet suddenly stops working, society reels from the loss of flowing data, instant messages, and streaming entertainment. Addicts wander the streets, talking to themselves in 140 characters or less and forcing cats to perform tricks for their amusement, while the truly desperate pin their requests for casual encounters on public bulletin boards. The economy tumbles further and the government passes the draconian NET Recovery Act. For Gladstone, the Net's disappearance comes particularly hard following the loss of his wife, leaving his flask of Jameson and grandfather's fedora as the only comforts in his Brooklyn apartment. But there are rumors that someone in New York is still online. Someone set apart from this new world where Facebook flirters "poke" each other in real life and members of Anonymous trade memes at secret parties, where a former librarian can sell information as a human search engine and the perverted fulfill their secret fetishes at the blossoming Rule 34 club. With the help of his friends, a blogger and a webcam girl both now out of work, Gladstone sets off to find the Internet. But is he the right man to save humanity from this Apocalypse? For fans of David Wong, Chad Kultgen, and Chuck Palahniuk, Wayne Gladstone's Notes from the Internet Apocalypse examines the question, "What is life without the Web?