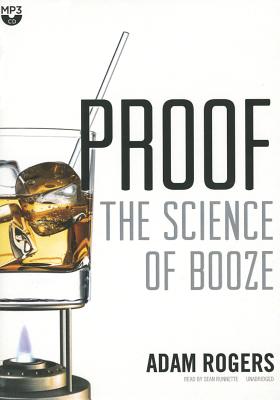 A spirited narrative on the fascinating art and science of alcohol sure to inspire cocktail party chats on making booze, tasting it, and its effects on our bodies and brains. Drinking gets a lot more interesting when you know what's actually inside your glass of microbrewed ale, single-malt whisky, or Napa Cabernet Sauvignon. All of them begin with fermentation, where a fungus called yeast binges on sugar molecules and poops out ethanol. Humans have been drinking the results for ten thousand years. Distillation is a two-thousand-year-old technology--invented by a woman--that we're still perfecting today. And the molecular codes of alcoholic flavors remain a mystery pursued by scientists with high-tech laboratories and serious funding. In Proof, Adam Rogers reveals alcohol as a miracle of science, going deep into the pleasures of making and drinking booze--and the effects of the latter. The people who make and sell alcohol may talk about history and tradition, but alcohol production is really powered by physics, molecular biology, organic chemistry, and a bit of metallurgy--and our taste for those products is a melding of psychology and neurobiology. Proof takes readers from the whisky-making mecca of the Scottish highlands to the oenology labs at UC Davis, from Kentucky bourbon country to the most sophisticated gene-sequencing labs in the world--and to more than one bar--bringing to life the motley characters and evolving science behind the latest developments in boozy technology.