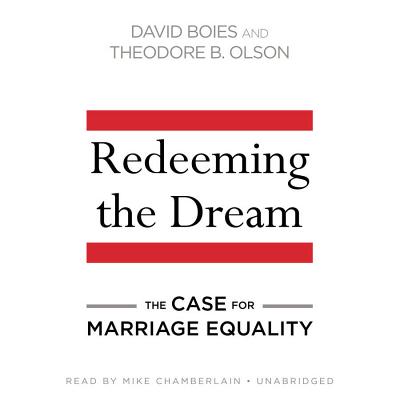 By David Boies, Theodore B. Olson, Mike Chamberlain (Read by)

The riveting inside story of the Supreme Court's landmark rulings on the Defense of Marriage Act and Proposition 8--by the two lawyers who argued the caseOn June 26, 2013, the Supreme Court of the United States issued a pair of landmark decisions, striking down the Defense of Marriage Act and eliminating California's discriminatory Proposition 8, thereby reinstating the freedom to marry for gays and lesbians in California.Redeeming the Dream is the story of how David Boies and Theodore B. Olson--who argued against each other all the way to the Supreme Court in Bush v. Gore--joined forces after that titanic battle to forge the unique legal argument that would carry the day. As allies, they tell the fascinating story of the five-year struggle to win the right for gays to marry, from Proposition 8's adoption by voters in 2008 to its defeat before the highest court in the land in Hollingsworth v. Perry in 2013.Boies and Olson guide listeners through the legal framing of the case, making crystal clear the constitutional principles of due process and equal protection in support of marriage equality while explaining, with intricacy, the basic human truths they set out to prove when the duo put state-sanctioned discrimination on trial.Redeeming the Dream offers listeners an authoritative, dramatic, and up-close account of the most important civil rights issue--fought and won--since Brown v. Board of Education and Loving v. Virginia.
or
Not Currently Available for Direct Purchase
Copyright © 2020 American Booksellers Association