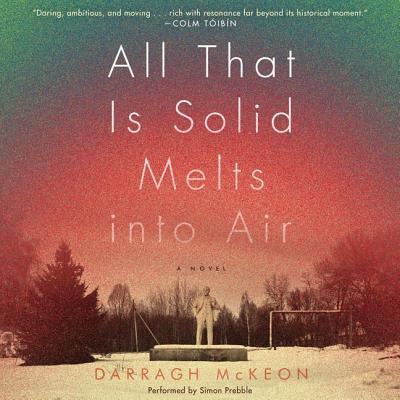 All That Is Solid Melts Into Air Lib/E

All That Is Solid Melts into Air is a gripping end-of-empire novel, charting the collapse of the Soviet Union through the focalpoint of the Chernobyl disaster. Part historical epic, part love story, it recalls The English Patient in its mix of emotional intimacy and sweeping landscape.

In a run-down apartment block in Moscow, a nine-year-old piano prodigy practices silently for fear of disturbing the neighbors.

In a factory on the outskirts of the city, his aunt makes car parts, trying to hide her dissident past.

In the hospital, a leading surgeon buries himself deep in his work to avoid facing his failed marriage.

And in a rural village in the Ukraine, a teenage boy wakes up to a sky of the deepest crimson. In the fields, the ears of the cattle are dripping blood. Ten miles away, at the Chernobyl Power Plant, something unimaginable has happened.

Now their lives will change forever.

All That Is Solid Melts Into Air is an astonishing end-of-empire novel by a major new talent.