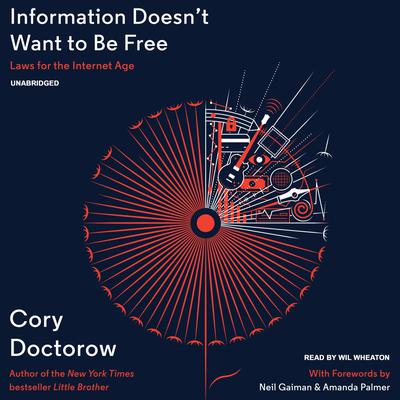 Laws for the Internet Age

In sharply argued, fast-moving chapters, Cory Doctorow's Information Doesn't Want to Be Free takes on the state of copyright and creative success in the digital age. Can small artists still thrive in the Internet era? Can giant record labels avoid alienating their audiences? This is a book about the pitfalls and the opportunities that creative industries (and individuals) are confronting today. An essential read for anyone with a stake in the future of the arts, Information Doesn't Want to Be Free offers a vivid guide to the ways creativity and the Internet interact today, and to what might be coming next.

Cory Doctorow is a Canadian-born blogger,
journalist, and author of nonfiction and award-winning science fiction. He is a
contributing author to Wired magazine,
and his writing has been published in the New
York Times Sunday Magazine
, the Globe
and Mail
, the Boston Globe, Popular Science, and others. He is
coeditor of the blog Boing Boing, and
he was named one of the web’s twenty-five “influencers” by Forbes and a Young Global Leader by the World Economic Forum. His
novels have earned him numerous awards, including several Prometheus Awards,
the 2000 John W. Campbell Award for Best New Writer, Locus Award for Best First
Novel, Sunburst Award, White Pine Award, and the John W. Campbell Memorial
Award. He has served as Canadian regional director of the Science Fiction and
Fantasy Writers of America. He currently lives in London.