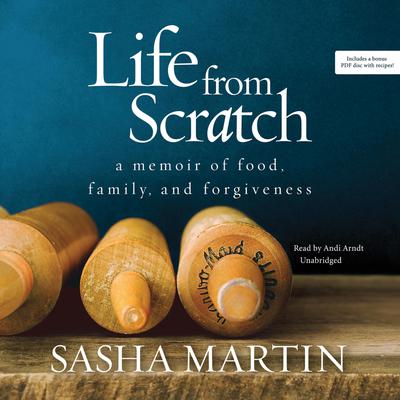 A Memoir of Food, Family, and Forgiveness

Sasha Martin set herself a rather ambitious goal: to cook—and eat—her way around the world with 196 recipes from 196 countries in 196 weeks. Enter Global Table Adventure, a project that proves to be more than just a culinary challenge as Sasha attempts to navigate the vicissitudes of marriage, motherhood, and life’s failures and successes, all inextricably linked to her troubled past.

For Sasha, food and cooking unlock the memories of a difficult childhood and the loss and heartbreak that came with it. She and her brother lived with their mother in Boston before being placed in foster care with a family in Europe. Among the hard moments of her young life, the most difficult occurred when Sasha was just twelve years old—she witnessed her brother’s suicide.

As she mines her past to make sense of her childhood, food allows Sasha to find her own place in the world—and create the home she has been craving her whole life. This is a story about food from around the globe but also about how food can transform us, about being a mother and a wife, about loving the world, and about learning to love ourselves.

Sasha Martin is an award­-winning writer and blogger. Her work has been featured on NPR and WholeLiving.com as well as in Bon Appétit, Smithsonian, and the Huffington Post. Her website, Global Table Adventure, is a go­-to hub for global foodies. She is a sought-­after presenter, having spoken at many schools, seminars, and dinners. She lives in Tulsa, Oklahoma, with her family.